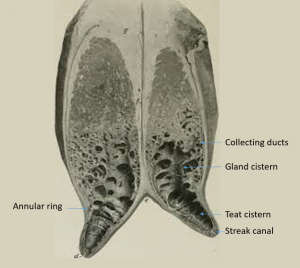 Milk flow and teat abnormalities are common in food animal practice.  Milk develops in the gland with impending parturition. The gland is also developing at the same time. A non-lactating heifer will not have fully developed collecting or gland cisterns until close to parturition.

Ultrasound can be used to assess normal structure and function of the gland and the teat. Milk will show as speckled black while the gland is white.

Once milking stops, the pressure of milk buildup starts the process of “drying off” and the udder returns to a quiescent state. This can start within 5 days. If surgery is indicated to fix an obstruction, the gland should be ultrasounded to verify milk is still being produced.