Penile amputation is performed for obstructive urolithiasis. It is considered a salvage procedure and is most commonly performed in feedlot steers.

The amputation needs to be performed proximal to the obstruction (typically the sigmoid flexure). The closest aspect of the penis to the skin is actually at the common obstruction site. The retractor penis muscles will be encountered first and are sometimes mistaken for the penis. They are paired, more superficial and less muscular than the penis.

The dorsal artery will need to be ligated. This will be on the opposite side of the penis since the approach is from the ventral aspect. 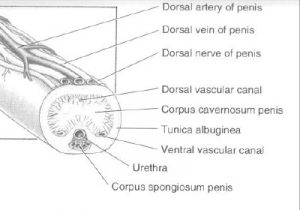 Position/preparation: The animal is kept standing. Chute restraint is recommended. The surgeon gloves.

Make a 12 cm vertical skin incision, starting just where the perineum starts to curve forward. Dissect down to the penis, primarily using blunt dissection.  Separate the penis from the surrounding tissues and pull it caudally and dorsally. A large carmalt can be inserted between the penis and pelvis to help retract the penis.

At least 6 cm of penis should be exposed without tension to prevent subcutaneous retraction postoperatively. The entire penis can be pulled free but this is not usually necessary. The dorsal artery and vein are ligated near the 6 cm point and the penis transected just distally.

The penis is secured to the surrounding skin using horizontal mattress or other tacking suture of 0 nylon or similar material. The horizontal mattress can be passed through the corpus cavernosum; this will also serve to control hemorrhage from the penis. 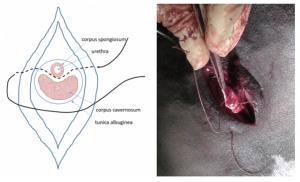 The surrounding incision is closed using short continuous runs proximally and distally to the horizontal mattress.

The distal segment of the penis can be removed if ruptured or necrotic. Steady traction will usually permit removal if necrosis is present. Otherwise dissection can be continued forward (distally) until the preputial attachment is cut.