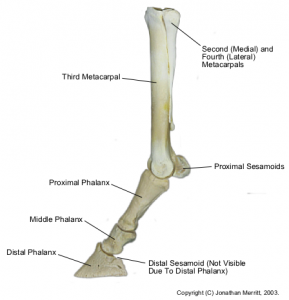 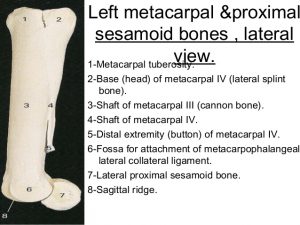 A.    medial and lateral fossae provide attachment sites for the collateral ligaments.

B.     The condyle is the distal articular surface of the cannon bone and P1 and P2.  Note, however, that the distal cannon has a sagittal ridge while the condyles on the distal ends of P1 and 2 are saddle shaped.

Note the sagittal groove on the proximal end of P1.  This groove interdigitates with the sagittal ridge on the end of the cannon bone.  A screwdriver fracture starts at this groove and runs longitudinally to split P1 into 2 pieces.  The screw driver analogy pictures the sagittal ridge of the cannon bone as the blade of a screwdriver and the proximal end of P1 as the head of a screw.   According to JR Rooney, these fractures are caused by rotary motion and acceleration.  Consider a screw in oak being unable to twist as rapidly as the screwdriver above it resulting in fracture of the screw.

Proximal sesamoids are what make the fetlock the widest part of the distal limb (other than the hoof).  Aside from their articular surfaces, the rest of the sesamoids are covered with a variety of tendons and ligaments.  Therefore, even after removal of the skin and loose subcutaneous tissue, the sesamoids are hidden from view by their many attachments. 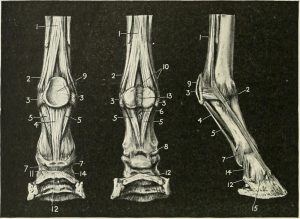 Note the strong proximal palmar (planter) edge.  This area is strengthened for insertion of the superficial distal sesamoidean ligament and the SDF tendon.  Not seen is the attached complementary fibrocartilaginous ridge of P2 which is part of the insertions.   On the sides of the ends of P1 and P2 there are depressions for attachment of the collateral ligaments of the PIP and DIP joints respectively.

This bone gets the popular name from its boat shape.  Note that the distal edge is rounded like the bottom of a boat, the proximal surface is straight like the deck of a boat.  Note the foramena on the distal edge.  These are probably for blood vessels, but if the blood vessels recede, the foramena may contain invaginations from the distal palmar pouch of the coffin joint.  The other surfaces are the flexor surface adjacent to the navicular bursa and the articular surface which forms part of the wall of the coffin joint = DIP joint.