When we talk about cattle enucleations, we generally mean exenterations.

There are two other main differences between small and large animal enucleations:

If the artery is ligated, you can also try a trampoline suture. The premise is that this will minimize the sunken appearance by providing a scaffold for fibrous tissue.

Watch this video as is first to get a general idea of how ocular SCC is handled surgically in cattle.

Whenever possible, stay close to the eyelid margins to enable closure! If closure isn’t possible, packing or stenting (tieing on a bandage to provide pressure) will be needed to control hemorrhage.

Aftercare is routine for any surgery – sutures are removed in 10-14 days and any infection managed through drainage. The most common complication is infection. 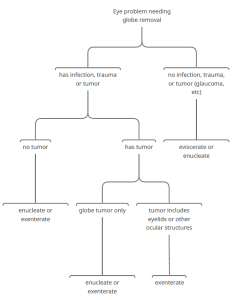