Tendonitis is a common debilitating injury seen in all types of performance horses. Tendonitis is referred to as “” due to the change in appearance with localized swelling (looks somewhat like a bow from a bow/arrow). A ‘bowed tendon’ typically carries a guarded prognosis for return to a high level of athletic performance. The rate of recurrence is considered to be high.

There is controversy on whether degenerative changes occur in the tendon and result in tendon weakening before full-blown tendon fiber disruption or whether tendon injuries occur as a result of a single overloading episode. Likely both occur and may vary depending on the horse. Degeneration may be the result of anoxia (lack of oxygen), possibly due to inherent deficiency in blood supply, or constriction due to stretching during exercise. Others have found an increase in temperature in the core of the tendon. This rise in temperature may occur due to the inability of a deficient capillary system to remove generated heat efficiently. This hyperthermia, perhaps combined with mechanical stress, could cause cellular changes that may result in depolymerization of the collagen. This heat could also destroy or interfere with the cross-linking which is required for optimum tendon strength.

When tendon fibers are torn, capillary hemorrhage and inflammation result at the site of injury. Inflammatory products result in further damage. Healing of tendon injuries requires stopping the inflammation and then restructuring the tendon with normal collagen (type I), with the fibers aligned along the long axis of the tendon and sufficiently cross-linked to provide strength. However, healing tends to occur by forming a knot of scar tissue : fibrous tissue (collagen type III) that is aligned in a variety of directions. Several treatment options may be used to prevent this type of scar tissue.

Chronic injury can lead to calcium deposits in the tendon as the body tries to strengthen the repair.

The most common site for tendon injury in Thoroughbreds is the superficial digital flexor tendon (SDFT) in the mid-metacarpal region. This region has the smallest cross-sectional area and may be stressed to a greater extent at this point. The deep digital flexor tendon (DDFT) is most often affected near the insertion of the distal check ligament or within the tendon sheath adjacent to or below the fetlock.

Initially,  the cardinal signs of inflammation are observed both on physical exam and ultrasongraphically.

The area is warm, painful and often swollen. The horse is lame initially but this typically improves rapidly.

generally has obvious effusion (fluid in the sheath). However, some areas are constricted by bands of ligaments (eg annular ligament); this pushes the fluid above and below the band.

On ultrasound, tendon fibers are often disrupted and hemorrhage and/or edema is present (separating the fibers and creating enlargement of the tendon).

Over time, the area stays swollen but the signs of inflammation resolve. The area may no longer be painful on palpation and the horse may be sound at a walk. However, the area is weak and prone to re-injury.

Medical treatment initially includes anti-inflammatory agents, cold therapy, wraps (keep the swelling down) and complete rest until the initial inflammation resolves. Other agents may be given to increase blood supply to the area to speed healing (the rationale behind therapeutic ultrasound and the previous use of ‘firing’).

Exercise protocols are designed to stimulate fiber alignment without overuse and re-tearing. Controlled exercise is key. Horses are NOT turned out as this would immediately result in reinjury. Complete stall rest is contraindicated as this doesn’t provide enough force for proper fiber alignment. Once a horse is sound at a walk without NSAID administration, horses are allowed to walk in hand (under control) for increasing amounts of time. If ultrasound reevaluation shows improvement, trotting is started at low levels (2 minutes per day). Exercise is gradually increased as long as the horse stays sound. Ultrasound rechecks are essential to detect early damage. If regression occurs, the training program is backed down and more time taken to move to the next level.

If healing is not progressing, other techniques may be used to minimize scar tissue and maximize collagen structure and alignment. Hyaluronic acid has been injected in the area in an attempt to prevent adhesions but has not been very effective. Polysulfonated glycosaminoglycan (PSGAGs) injections (IM) did help healing in experimental studies. Shockwave therapy is most likely useful at bone-tendon junctions and unlikely to be useful in the middle of a tendon (despite its widespread use).  Various stem cells and stem-cell types have been injected in the region with varying results.

Surgical treatment is considered only when horses do not respond to medical therapy and exercise or if they plateau (no further improvement). One option is “tendon splitting”. This is used to increase blood supply to the area. It is most useful for core (central) lesions that aren’t healing with medical treatment.

If the tendon is swollen in the area of the fetlock, the palmar annular ligament may be cut to reduce pressure on the tendon as this pressure can even damage normal tendons.  Finally, in one study, cutting the proximal check ligament aided in preventing recurrence of the bow, not by increasing strength of the repair but by increasing the elasticity of the entire tendon unit* (and led to more suspensory ligament damage). * Cutting the proximal check releases the pull of the inflexible ligament on the SDFT leaving only the more flexible SDF muscle belly to “pull” on the tendon.

A bandage bow is damage to the peritendinous structures leading to inflammation that looks like a bow. Luckily the tendon itself is not involved but you can’t tell that by appearance (they look similar). Ultrasound is typically needed to differentiate tendinous swelling (real tendonitis) from peritendinous swelling (bandage bows). Bandage bows often occur due to a bandage being too tight or too loose (sliding down and constricting). Bandage bows respond to anti-inflammatory treatment (cold therapy and NSAIDs). The horse should be stall rested until ultrasound can be performed to confirm the tendon is okay. 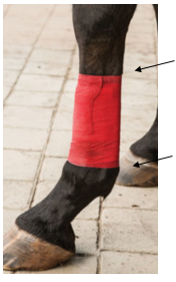 This sort of bandage on a horse is likely to cause damage at the edges -it can be pretty tight and put pressure on the soft tissue structures and tendons.

Tendonitis is inflammatory damage within a tendon. The superficial digital flexor tendon is most commonly affected and gives the appearance of a “bowed” tendon. Healing is slow and requires controlled exercise. Ultrasound is used to monitor healing as the initial signs of heat, pain, and lameness fade before the tendon is healed enough for regular work.

Treatment involves rest, cold therapy, wraps and anti-inflammatory agents during the acute stage and stall rest+ controlled exercise after lameness resolves. Other therapies are added if needed due to poor healing.

Controlled exercise is essential. Tendon and ligament fibers require exercise force to align properly. Complete stall rest minimizes those forces resulting in a mishmash of fibers. Pasture turn out is too much exercise and leads to continued damage.

Bandage bows are not truly tendonitis but are swellings around the tendon due to improper bandaging. These heal readily.

inflammation of a tendon sheath