We use local blocks very commonly in large animal species. Often bovine standing surgery can be performed without sedation and just with local anesthesia. Epidurals are also relatively easy in dairy cattle and can help with many perineal procedures. More and more horse surgery is being done standing with sedation and local blocks.

Lidocaine – Lidocaine is the predominant local anesthetic agent used. Species sensitivity varies with small ruminants and camelids much more sensitive than cattle. Horses are relatively insensitive. The following guidelines are useful to consider as high end doses. Calculate how much you can give and then decide if you need to dilute the drug. Diluted drug still works but has a shorter duration. Hint: 2% lidocaine is 20mg/ml.

Mepivicaine lasts longer than lidocaine and can be used for longer procedures if needed. Mepivicaine is commonly used in equine procedures. Bupivicaine can be more tissue toxic is typically isn’t used except for therapeutic long term blocks (laminitis treatment).

Nerve blocks: If we know where the nerve is, we can just put local anesthetic near the nerve. Eg dehorning blocks, paravertebral blocks, lameness blocks

Line blocks: Local anesthetic is injected in the line of the planned incision. This does deform the tissue planes but is the easiest to perform; no guessing required.

Field blocks: The nerves to a region are blocked using specific types of line blocks. An L block is used in the flank to block the regional paravertebral nerves.

Ring blocks: A specific type of field block. The entire limb is encircled with subcutaneous local anesthetic to reach any and all nerves

Regional iv blocks: A tourniquet is placed on the limb and local anesthetic injected into a vessel below the tourniquet. The local anesthetic is diluted to the level that it pushes out of the vasculature and into the tissues (typically 20 cc +). This is  mock up in a calf using a butterfly catheter (you are supposed to hold the wings up to help direct it).

Rather than threading the vein, go straight in at the “squishy” part – level of the dewclaws, center of the limb. The vessel is very superficial

Sterile block: for “top ups” – eg it didn’t work and now you are scrubbed in and sterile (and have to block her again)

The most common epidural agent in food animals is again lidocaine. We typically use 2-8 mg/kg BW, or 5 cc as starting amount in a standard size dairy cow. Lidocaine epidurals can cause ataxia and even recumbency. Lidocaine can be combined with xylazine for longer duration effects with less risk of recumbency; the combination is more common in horses than in cattle. Detomidine leaves the epidural space quickly in cattle so more resembles intramuscular detomidine than epidural detomidine. Ketamine and morphine are other options for epidurals.

Epidurals are typically performed in the sacrococcygeal space (the most movable space when the tail is pumped up and down). In dairy cattle, a 1.5″ 18 ga needle is inserted in that space at a 45o angle so that the hub is angled toward the tail. A drop of lidocaine is put in the needle hub and should be sucked down into the needle when the epidural space is reached. This is known as the hanging drop technique. It works well in most dairy cattle but isn’t as useful in obese animals.

If the needle is positioned so the bevel is up,  the drug will diffuse further forward. If the bevel is pointed down, this will tend to keep the drug in the caudal region.

Flank surgery is common in cattle and requires good local block. Options include a line block (at the incision site), an inverted L and paravertebral blocks

A line block is an injection of subcutaneous lidocaine along the site of the incision. Relatively straightforward, it is often used when nothing else is working. The block can be easier on the animal if a longer needle is used and is inserted through the site of the last injection. This minimizes the number of pokes in unblocked skin. For flank incisions, it is important to also place lidocaine deeper in the muscle layers.

The main disadvantage of a line block is distortion of the surgery field. 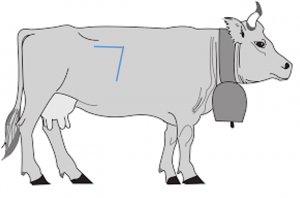 This block is similar to the line block but is used to block the nerves as they come down the flank and avoids lidocaine directly in the surgery field. The lidocaine is injected in two long lines – one just behind the last rib and one below the transverse processes of the vertebrae. The injection must be deep enough to get the deeper nerves and typically does not block the peritoneum.

For this block, the spinal nerves T13, L1 and L2 are blocked as directly as possible as they exit the spinal cord. This creates a more

effective block. When the block is working, the cow will bend toward the opposite side as muscles are relaxed. The flank will also be warmer due to related vasodilation.

At each site, ~20 ml of lidocaine is injected. Needles are inserted above the transverse processes T13, L1 and L2 and walked off the dorsal margin of each bone. A long needle is used to block the nerve branches both above and below the fascia.

This block can be challenging in very large beef breeds due to difficulty palpating landmarks.

This block is also aimed at spinal nerves T13, L1 and L2 but is coming at them from a more distal position. As the nerves traverse caudally, the injection sites are at the tips of L1, L2 and L4.  At each site, 10-20 ml of lidocaine is injected.