Older horses get arthritis; osteochondrosis is more likely to be diagnosed in a young horse.

The tarsal joint is really a collection of four joints, some of which communicate with each other but there are horse to horse differences.

This is the big joint and is where all movement occurs.  It always communicates with proximal intertarsal joint. Effusion of this joint is known as bog spavin.

This is a low motion joint. Arthritis in this joint is called bone spavin.

Injection of the distal intertarsal joint is the most difficult due to narrow space and heavy covering with the medial collateral ligaments. An imaginary line is found between the distal (medial) tubercle of the talus and the groove between medial splint and the cannon bone.  The injection point is on this line and just distal or thru the cunean tendon distal edge.  The goal is to pass the needle tip into the intersection of Tc with T3 and T1+2. 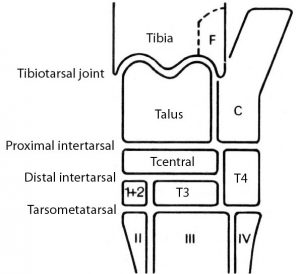 This is a low motion joint. Arthritis in this joint is also called bone spavin.  In 10-40% of hocks this joint will communicate with the distal intertarsal joint. Some drugs may also diffuse across these joints.

To inject this joint, pass the needle tip on the lateral side between T4 and edge of the head of lateral splint (Mt 4). 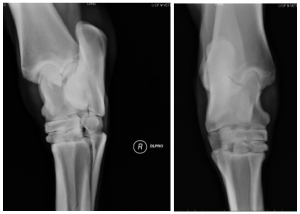 Bone spavin is arthritis of the distal hock joints (tarsometatarsal and distal intertarsal joints). These are low motion joints but are affected by normal wear and tear due to gliding, stopping, and turning. Most older horses that have been in any degree of work will have changes in these joints. Some younger horses may also have changes, despite not being in work. The changes in younger horses are suspected of being due to cartilage abnormalities (form of osteochondrosis).

Hock joint arthritis is common in many performance horses.

Horses with bone spavin will have an abnormal gait with a low foot flight because tarsal flexion is painful. Upper limb flexion will make the lameness worse.

Relief of pain after anesthetic injection of the cunean bursa or distal intertarsal joints.  The injection sites are as follows:

Radiographic lesions include osteophytes (new bone at the edges of joints) which make the bone edges sharp or appear to have spikes, loss of joint definition (lack of a sharp line) due to cartilage loss and bone formation in the space, and mild remodeling of the boney shapes – the joint may look fuzzy.

Because these are low motion joints, treatment is aimed at fusing the joints so that motion (and therefore pain) no longer occur. This can be done by keeping the horse in work (and on analgesics); however, it may take some time for natural fusion to occur.  The process can be speeded by injecting the lower joints with steroids, injecting them with a compound that destroys cartilage (monoiodoacetate or MIA; no longer in favor), or by removing the cartilage with a drill while the horse is anesthetized. Historically, cunean tendinectomy was performed to relieve pressure on the remodeled bone. Prognosis is favorable as long as only the lower two joints are affected. Since the proximal intertarsal joint communicates with the high motion tibiotarsal joint, changes in that joint are more serious and can lead to arthritis in the tibiotarsal joint.

Osteochondrosis dissecans is a developmental disorder whereby pieces of cartilage +/- bone break off.

Clinical signs include joint effusion with minimal lameness. Young horses just being put into work are most commonly affected.

The predominant sites in the hock are the distal intermediate ridge of the tibia (known as lesions) and the lateral trochlear ridge of the talus. The medial malleolus can also be affected.

OCD is often a bilateral condition so both hocks should be radiographed. Fragments of bone may be apparent in the joint. Arthroscopic surgery may be necessary to find cartilage fragments and is the treatment of choice. Once the fragments are removed, horses with hock OCD have a very good prognosis for future performance.

Capped hocks are due to bursitis and are generally related to trauma. Note the swelling is more localized to the point of the hock.

Other lesions include infections, fractures of the cuboidal bones and hock luxations.

Young horses get joint effusion from osteochondrosis. The most common site is the tibiotarsal joint with a fragment off the distal intermediate ridge (DIRT lesion)

Older horses are painful due to arthritis. Arthritis most typically affects the lower joints: tarsometatarsal and distal intertarsal joints. This is referred to as bone spavin.

Diagnosing lameness in the tarsus and proximal suspensory region, FAEP 2017

Osteochondral fragments from the
Distal
Intermediate
Ridge of the
Tibia