Camelids bear weight on both P2 and P3 rather than just on P3 as with most large animal species. There is no navicular bone. They walk on double pads with a claw in front. The claw is nonweightbearing but is important for traction and propulsion. A digital cushion supports both P2 and P3.

Camelids are not prone to foot rot but can get interdigital dermatitis if conditions are right (moisture + trauma). The same conditions and organisms can cause ulcerative pododermatitis of the foot pads. Treatment requires removal of any loose skin or pad, antiseptics and protection with a wrap or bootie. The animal should be kept in a clean, dry environment. Antibiotics may be used for deep infections.

The dorsal interdigital region and heel area are both common sites for chorioptic mange.

Mild bilateral is prevalent in camelids. More severe deformities may be related to hypophosphatemic rickets. Crias with dark hair coats are especially prone to developing low vitamin D levels because of reduced absorption of sunlight by the skin. Crias born during the cloudy months should be supplementation with 1000 IU/kg vitamin D3 subcutaneously (SQ) every 60 days. due to rapid growth has also been identified. Once the cria was weaned, the physitis resolved and the angulation improved.

Camelids with severe angular limb deformities can be corrected with transphyseal screws or bridging as in horses [see equine chapter]. Camelid growth plates close much later than horses so more time is available for self-correction.

Flexural deformities are encountered and are treated similarly to foals. More aggressive tenotomy or is possible due to the limited athletic need.

Camelids can develop dropped fetlocks, similar to that seen in horses with suspensory degeneration. Unilateral cases can occur with excessive weight bearing and more likely suspensory damage. Bilateral cases have been associated with mineral deficiencies, proteoglycan levels in the suspensory and genetic predisposition. As with horses, no effective therapy exists and prognosis is poor.

While horses and cattle develop bony sequestration after wounding, many of the diagnosed in camelids do not have open wounds associated. These are most common in young camelids and more closely resemble a syndrome seen in children in which bacterial emboli seed bone, leading to bone ischemia.

Long bones of the appendicular skeleton seem to be most affected. Animals present heat, pain, local swelling and lameness.  Diagnosis is made radiographically. 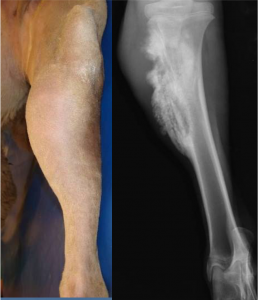 Sequestrectomy usually results in a good prognosis as long as enough supporting bone remains to prevent fracture. Culturing the bone is recommended

Stifle ligamentous injuries (cruciate tears) are not common but can be found in camelids. Both intracapsular and extracapsular approaches have been successful.

Patellar ligament tears have been reported in pack-llamas and breeding male llamas. Affected camelids walk with a crouched posture (stifle stays flexed) and are unwilling to bear weight fully. Diagnosis is confirmed via surgery with variable attempts at repair being relatively successful even though repair failure rates are high (scar tissue?).

Shoulder luxation is uncommon but is seen in young males and in alpacas. Surgical repair is generally successful. Animals are kept in a Velpeau sling in the early postoperative period.

Hip luxation is treated as it would be in dogs.

General arthritic pain is treated with meloxicam and supportive care.

Patellar luxation can be due to trauma or to congenital conformational abnormalities. Animals castrated early in life (<12 mo old)  tend to develop straight hindlimbs and are considered more prone to luxation. Treatment involves lateral imbrication and release (surgery), possibly combined with trochleoplasty. Recurrence is common. A sling may be needed for the first two weeks postoperatively unless trochleoplasty is performed.

Camelids do not get too many lameness issues.

Camelids can be treated much more like dogs in terms of joint luxations, etc. Light bodies and able to ambulate on three limbs.

limb bows outward at the carpus so th

inflammation of the growth plate or physis

cutting of a ligament