Study of 2D sections is essential for understanding CT and MR images. One weakness of conventional radiographs is that they are limited to full thickness images while CT and MR images can isolate a plane (slab) of tissue so that a small lesion is not obscured by larger structures in adjacent planes that are lumped together to form a full thickness image. Therefore, study of foot bandsaw sections is helpful for understanding CT and MR images. CT is best for mineralized tissues (like conventional radiographs) while MRI is best for soft tissue. MR images are brightest for tissues containing water or fat because MRI depends upon signals from the protons of hydrogen atoms and these are most commonly found in water and fat. For that reason, cortical bone will be dark while medullary bone will be bright (as seen below). Likewise, synovial fluid will be bright and inflammation (edema) will be brighter than normal tissue in MRI images 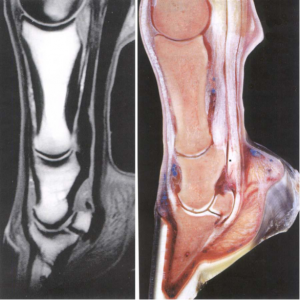 Note the bright medullary bone and dark cortical bone in the MR image on the left. Also note how synovial fluid is bright and articular cartilage is dark. Likewise, the DDFT and the straight distal sesamoidean ligament are dark. *=fibrocartilaginous part of DDFT on right.

We will review three types of sections: 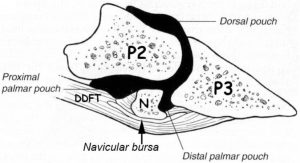 This is a sagittal section showing the DIP (distal interphalangeal joint) with three distended pouches. Not labelled is the thin distal sesamoidean impar (unpaired) ligament that binds the navicular bone to P3. Because the DDFT curves around the navicular bone, this bone acts as a trochlea (pulley). Hence the term podotrochlear apparatus (bone and ligaments). 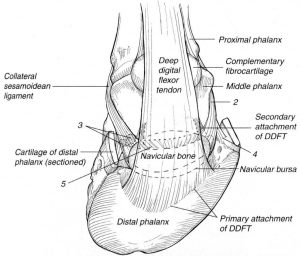 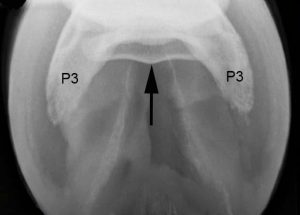