Ideally, we choose antibiotics based on the level of need – the type of organism, the level of importance (static vs cidal drugs), and known resistance patterns. Often, we have to include route of administration so that clients (and veterinarians) don’t get hurt when administering longer term therapy. We also have to remember that many oral drugs will not make it past the rumen or C3 to be absorbed by the patient.

Also ideally, we have a set of guidelines that helps us decide when to pull out the “big guns” and the “big guns” still work because we don’t use them unless necessary. The drugs we can use vary by species and we try to avoid using the “big guns” for prophylactic (preoperative, just in case) administration. 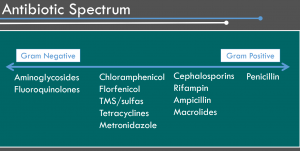 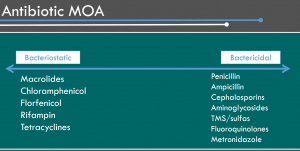 Prophylactic drug choices tend to be more consistent as prophylactic use is designed to prevent contamination rather than treat an infection. Bacteriocidal drugs are preferred.  Managing skin flora is a common concern so drugs that tackle gram positive organisms are typically included. If the surgery will involve the GI tract, gram negative organisms should be on the list. Anaerobic organisms are included when the foot, colon or rumen is involved.

Horses tend to get Excede (a long acting ceftiofur) for castrations and similar superficial procedures. For more involved procedures, they are given gentamicin (for gram negatives) plus penicillin or cephalosporin (for gram positives). Penicillin is also useful for anaerobic organism management. Trimethoprim sulfa is a bacteriostatic drug combination that can be used as a prophylactic antibiotic if needed but it does need to be administered a few hours prior to surgery. It is more commonly used for therapy – it can be given orally and is relatively broad spectrum.

Small ruminants and camelids will often get a cephalosporin (more broad spectrum) or ampicillin. Pigs will often also get these drugs as they are approved in swine and can be given im.

Beef cattle are treated like small ruminants and camelids and get a penicillin, ampicillin or cephalosporin. For dairy cattle, we often start with ceftiofur sodium even though it is more expensive because it doesn’t add much antibiotic to the milk and the milk can be safely fed to others. Penicillins and similar drugs are leaked into the milk meaning the milk cannot be sold for human consumption.

The amount of time needed for the drug to leave the tissues so that they are safe for human consumption. The standard tissues are meat and milk. FARAD.org is the main source of information for how much time is needed.