These can occur in any animal with an abomasum. Rare in small ruminants.  Beef and dairy cows are at equal risk.

Cow is put on her back with casting ropes and/or sedation (acepromazine, xylazine and/or butorphanol). When she is on her back, the abomasum should float into its normal position. After the abomasum is identified by pinging, two toggles can be placed in the abomasum. Quick work is needed to identify the abomasum before the gas leaves. Potential complications include not being able to find the abomasum and toggling the pylorus. Other risks include tacking other structures, tacking the abomasum in the wrong position and problems associated with dorsal recumbency.  If the cow is not doing well 2 days postoperatively, the toggle should be cut loose. If she recovers, the toggle should be cut free in 2-3 weeks to prevent fistula formation.

This is a tack suture vs a toggle but you can see the general procedure:

This one has lots of details : MSU roll and toggle

This one has videographer challenges: Roll and toggle

This procedure is done standing with a local block. An incision is made in the right paralumbar fossa and the abomasum identified through palpation of the far side of the abdomen. The abomasum is decompressed using 10 gauge needle attached to tubing. Once it is deflated, the surgeon reaches underneath the viscera and pulls it over to the right side. This can be a scoop after lifting the viscera or a pull on the omentum. Once it is pulled to the right side, the omentum just caudal to the pylorus is used for the pexy. There are many versions of omentopexy.  Commonly, horizontal mattress sutures are used to attach the omentum to the muscles on the cranial aspect of the incision. If desired, part of the antrum (slipped mucosa) can also be attached to the cranial incision.

Complications include breakdown of the pexy, particularly in very fat cows or pregnant cows. If adhesions are present, the abomasum often cannot be brought to the right side.

This procedure is done standing with a local block. An incision is made in the left paralumbar fossa and the abomasum identified as a gas distended structure in the incisional area. A short run of ford interlocking sutures are preplaced in the greater curvature. These will create your pexy through adhesion formation. A needle is placed on each end of the suture and these ends run out the ventral body wall to the right of midline, just behind the xiphoid. An assistant is generally needed to grab the needles as they exit the body wall. The abomasum is deflated and the sutures pulled tight. This will pull the abomasum to its normal position. After checking to make sure no structures are stuck between the abomasum and the body wall, the sutures are tied to each other, creating the pexy.

Complications include entrapment of viscera, breakdown of the adhesion and abomasal fistula formation. Can be useful if adhesions.

Cannot be done for an RDA or abomasal volvulus.

A right flank abomasopexy is performed similarly to a left sided long tack. Generally, this is only possible with an RDA. The structures are stretched and exposed enough with RDAs; not enough abomasum is exposed with most LDAs 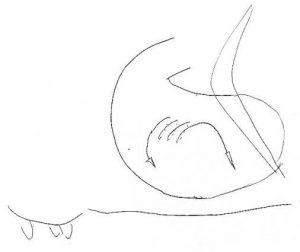 This procedure is done with the cow in dorsal recumbency as for the toggle procedure. A 4″ incision is made 4″ caudal to the xiphoid and 4″ to the right of midline, avoiding the milk veins. Once the peritoneal cavity is entered, the abomasum is identified. It should have returned to its normal position and can be identified via the mucosal slip. The pexy is performed by incorporating the abomasum into the closure of the internal rectus sheath using a continuous pattern. The pexy should extend for ~ 6 bites and finish ~4″ from the reticuloabomasal fold.

Complications include problems with recumbency (worsening pneumonia) and with standing up. Cows with nervous ketosis, musculoskeletal issues and pneumonia should not be put into dorsal recumbency.

Should not be used with an abomasal volvulus or anything that might be a volvulus.

This is basically a visualized toggle procedure and generally requires casting the cow.

LDAs are most common in dairy cattle that have recently (within 6 weeks) calved. RDAs can occur in all large ruminants.

There is no definitive best approach for correcting a displaced abomasum. Factors to be considered include health of the cow, availability of a surgeon and other help, facilities, LDA vs right sided displacement/torsion, and cow value.

Procedures include both direct and indirect tacking of the abomasum to its normal position or into a position on the right that prevents future movement.

tacking the omentum in place to prevent movement of the abomasum