Most, but not all bones have both a proximal and distal physis.  Growth of the long bone occurs in the physis as most of the cells in the physis are cartilage. Physeal growth also adds to the width of the bone.

Growth plate trauma (overload) can lead to fractures but more often impacts growth. If the physis is traumatized, it doesn’t grow as well. Often the trauma is not uniformly distributed. If one side of the physis grows well but the other doesn’t, the limb grows crookedly (angular limb deformities).

In young animals, rapid growth and exuberant exercise can be enough to damage the physis. If the physis is evenly damaged, the limb is just shorter but straight. This is rare. Generally one side of the physis is affected more than the other. The leg then deviates toward the compressed side, creating an angular limb deformity. [Note: ALDs can develop through other pathways too.]

Physitis= inflammation of the physis.

Physitis can occur due to excessive trauma on a normal physis or to normal trauma on an abnormal physis. Causes include rapid growth due to genetics and/or diet, excessive exercise, uneven weight due to an angular limb deformity (ALD), or abnormal cartilage. If the cause is exercise or growth, the physitis is usually symmetrical. If the physitis is asymmetrical, look for ALDs. 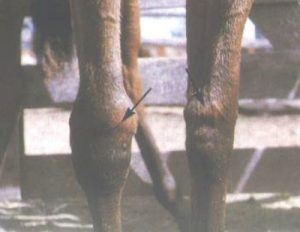 Radiographs show mixed density in the physis – a combination of sclerosis and increased lucency.

Windswept foals have both a valgus and varus deformity:

The most common versions are carpal valgus, tarsal valgus and fetlock varus. Mild carpal valgus can be protective; <5 degrees in a foal is considered normal. Varus is problematic and needs correction.

Many foals have external rotation of the forelimbs. The toes point outward. However, the limb is straight but is rotated from the shoulder.

This will correct as the horse develops a broader chest. It is important to not diagnose or misdiagnose an ALD if the limb is rotated but straight. Line up with the foot and/or look down from the shoulder.

Not all ALDs come from a physeal abnormality. Other causes include ligamentous laxity and cuboidal bone abnormalities. Newborn foals can just have weak ligaments. These limbs can be straightened manually and you may be able to see changes as they move. These foals should not be lame.

Premature foals often have immature cuboidal bones (the carpal and tarsal bones are still mostly cartilage). Immature bones squash and then ossify in an abnormal shape.

To determine the cause of the ALD, radiographs are taken using long plates. Draw a line down the middle of each long bone. Where they intersect is typically the cause of the problem (joint or physis). Radiographs also let you assess the cuboidal bone development. 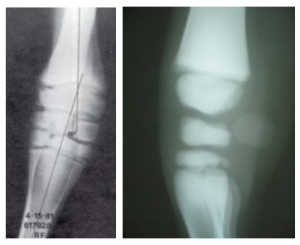 Different physes grow at different rates and for different times.  For correction to work, the physis still needs to be growing. Monitor the more distal joints closely as you have a smaller window of growth.

Surgery is needed if

Implants are put on the faster growing side to slow it’s growth and let the other side “catch up”. It is possible to overcorrect so implants need to be removed. Historically we performed periosteal stripping to stimulate the slower growing side. These may or may not have done anything (mother nature fixed them?) but overcorrection was not an issue.  Implants may be a combination of screws and wire as seen in this image (transphyseal bridging) or a single screw placed across the physis (transphyseal screw). 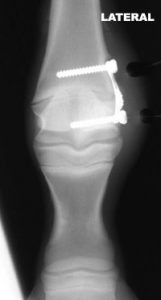 These implants need to be removed if the limb becomes straight and the foal is still growing as the limb can overcorrect.

Angular limb deformities can occur due to tendon laxity in newborn foals, due to crushed cuboidal bones (due to prematurity and poor ossification), or due to trauma and/or inflammation of the growth plate. Mother nature will fix some of these but success depends on the physis involved and due to the degree of angulation. If the fetlock is involved, surgery is indicated earlier rather than later as this physis closes very early in life. Newborn foals with ALDs should be radiographed to assess cuboidal bone maturity.