Common teat issues include lacerations, congenital anomalies and blunt force trauma. Many are fixable but with a poor long term prognosis. Determining which are reasonable to fix is important.

Palpation and ultrasound are key.

Palpation of the teat can identify if it is filled with milk, fibrosed or inflamed. A sterile teat cannula can be inserted into the teat and used to palpate the lining. The cannula should be easy to insert and the lining should be smooth. Milk should flow from the cannula in a normal lactating animal.

Ultrasound can be used to determine the location of the obstruction, determine if the gland is normal and active, and identify abnormal milk flow with lesions such as conjoined teats.

Milk can be identified in a normally functioning teat and gland. With stimulation, milk should enter the teat canal. A teat may be normal and be devoid of milk if the milk is not being produced or if milk cannot enter the teat. A common obstruction is a membrane at the junction of the teat and gland. With careful positioning, this membrane can be observed ultrasonographically in some cows.

Ultrasound can often detect fibrosis and intraluminal obstructions. However, agenesis of the teat lumen (lack of formation) appears the same as a normal teat without milk flow.

Two issues can arise with the gland. Congenital anomalies often come with other congenital anomalies. A malformed teat may coexist with malformed gland. And, if the teat has been obstructed for >5 days, the gland will start to dry off, even if normally structured. The quarter should be compared to the contralateral quarter to assess structure. A common abnormality is lack of gland cisterns (collection sites). This will significantly impact milk quantity.

Evaluation of the internal structure of the teat can be performed by thelotomy (incision) or by scoping the teat with a needle scope. This is a referral procedure.

This teat has been stepped on and the teat sphincter damaged. The damaged portion has everted into the teat lumen. This causes intermittent obstruction of milk flow. 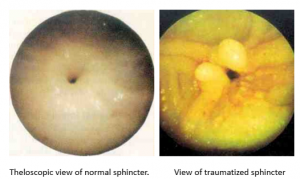 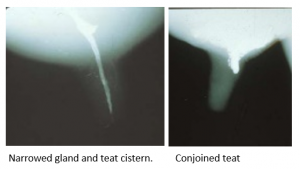