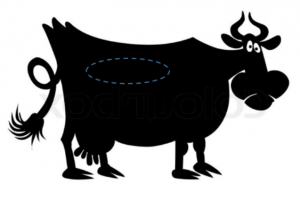 Rectal examination : A large viscus (long balloon) can be palpated in the pelvic inlet to the right of midline

Treatment: while cattle may respond to medical therapy (calcium supplementation), surgery can help by relieving the distension. The cecum is approached via  right paralumbar fossa incision. In most cases, the distended cecum is readily identified with palpation on the inner aspect of the omental sling. The bovine cecum is just a plain sac- no bands or sacculations. 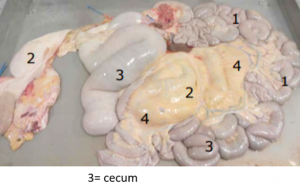 The cecum can be exteriorized for gas decompression (10-14ga needle inserted through a cruciate suture) or via typhlotomy (incision at the tip of the cecum).

The cecum may twist (cecal volvulus), causing ischemic necrosis.  These cattle may show signs of colic. If cecal necrosis is identified, the necrotic portion of the cecum can be removed (typhlectomy) via standing surgery.