Cows can also be “tight milkers” and have slow milk flow. Others tend to leak milk. Fixing these is more an art than a science.

Tight milkers – the sphincter can be partially transected in an attempt to improve flow. With the udder full, a teat knife is used to create 2 to 4 partial thickness incisions from the lumen side, spaced equally around the teat. The teat is cut until milk starts to leak. The incisions will fibrose over time, potentially leading to improved milk flow, excessive milk flow or even more limited milk flow. 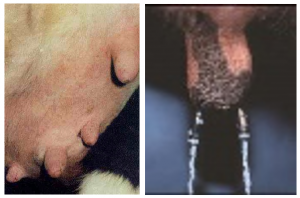 Supernumerary teats may look like regular teats and be fully functional with normal anatomy. Others will be fused to the normal glands or teats and leak milk due to abnormal position and lack of normal sphincters.

Supernumerary teats are typically removed in calfhood so that the gland does not develop. The teats are removed with scissors, cutting along the long axis of the gland to follow the lines of tension.

If discovered later in life, the entire teat is removed and the lesion closed in 3 layers to minimize leakage. If the only visible issue is a fistula, that is also resected and closed. This will result in milk production changes related to size of the supernumerary gland.

If conjoined teats, the wall between can be opened up to allow milk to flow from both glands.