To relieve pain form navicular disease, fracture of the navicular bone, and select lateral-wing fractures of the distal phalanx. This procedure is not benign and the potential complications should be discussed with the owner prior to surgery.

The palmar digital nerve is transected both medially and laterally in the pastern region. The nerve is typically on the axial aspect of the neurovascular bundle and is closely associated (fused with) the artery. The ligament of the ergot crosses over the nerve and is shiny. 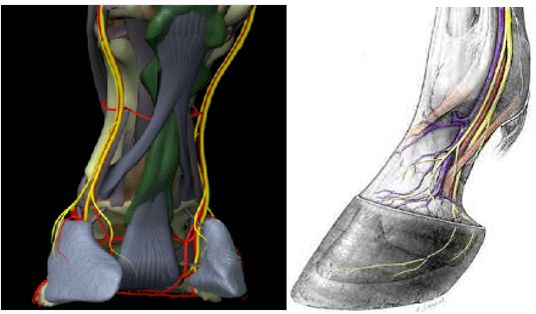 Occasionally, a horse will have an additional branch that innervates the region. If this branch is not transected, the area will continue to have sensation. If the nerve is transected too far proximally, the surgery can alter the vascular tone to the foot and lead to proprioceptive dysfunction.

Food restrictions: If the surgery is performed under general anesthesia, food should be restricted if possible (2-6 hours)

NSAIDs/analgesics: NSAIDs should be administered preoperatively and postoperatively.

Local blocks: Local anesthetic injected at the level of the abaxial sesamoid may be used in the standing patient and may make anesthetic maintenance easier under general.

Neurectomy may be performed with local anesthesia in the standing patient or under general anesthesia. The area of the surgical incision is clipped, shaved, and prepared for surgery in a routine manner. Unless the hindlimb surgery is completed first, plan on performing your neurectomy on the upper forelimb (or do both).

The hoof should be covered with a sterile drape (towel or sticky drape or large surgery glove). An additional drape should be positioned to minimize suture contamination. This can be on the ground for standing procedures, or the upper limb and below the limb for recumbent procedures.

The procedure described is called the Guillotine method. An incision 2-cm long is made over the dorsal border of the flexor tendons. By pulling on the ergot the ligament of the ergot is tensed. The incision is extended through this ligament. The nerve is directly under the ligament and is strongly associated with the artery. Both are usually retracted together using hemostats to elevate them to the incision. It is important to keep tissue trauma to a minimum. The nerve is most axial of the three structures. The artery is then dissected off the nerve. The artery is elastic and should bounce back to normal shape when released. The nerve will remain stretched. Fibers should be palpable on the nerve and not on the artery. The nerve will not bleed if a 25ga needle is inserted. Once the palmar digital nerve is identified the surgeon should look for accessory branches. The nerve is dissected free of the subcutaneous tissue. The nerve is severed at the distal extremity of the incision. Then a hemostat is place on the nerve, which is stretched while being cut with a scalpel at the proximal limit of the incision. Approximately 1-2-cm of nerve should be removed. Make sure you remove nerve not ligament of the ergot or a vessel.
The subcutaneous tissue is closed with 2-0 absorbable material and the skin closed with a nonabsorbable monofilament.