Stabilization of the abomasum is indicated with any DA surgery. Right paramedian abomasopexy is one option. This is a direct tack of the abomasum in its normal location. This method can be performed in cows that cannot stand due to trauma or milk fever.

The abomasum is normally located on the ventral abdomen, typically just to the right of midline. It often shifts horizontally across the midline during late gestation. When gas filled, the abomasum can displace to either the left or the right sides of the abdomen and float up. The pylorus will stay more ventral while the body of the abomasum floats more freely upward.

Exploratory options are limited from this approach due to the massive rumen. The abomasum should sit between the reticulum and rumen. 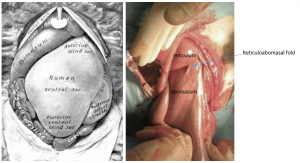 The abomasum is identifiable by the noticeable mucosal slip as the wall is palpated. The reticulum has a honeycomb texture and is connected to the abomasum by a ligament (reticuloabomasal fold).

Antibiotics: Recommended. As cows can wall off infection, there can be surprises inside. If milking, ceftiofur 2.2 mg/kg im is standard. In beef or non-lactating cattle, other options do exist. Remember: the label dose of procaine penicillin is ineffective!

Local blocks: U block (line block in a U shape)  or line block

Position/preparation: The animal is positioned in dorsal recumbency. This typically involves sedation (20 mg xylazine or similar) and casting ropes. The gutter makes a decent trough to help hold the patient in dorsal; bales can also help to support her in that position. 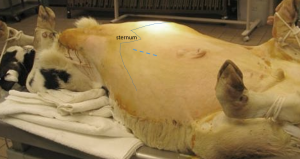 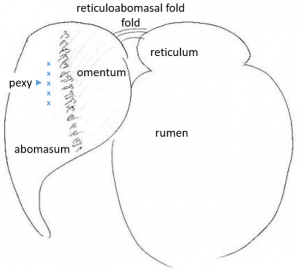 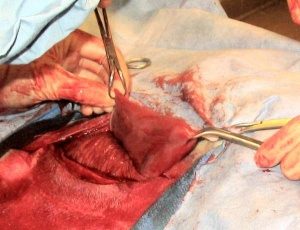 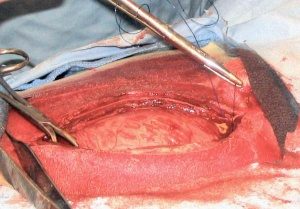 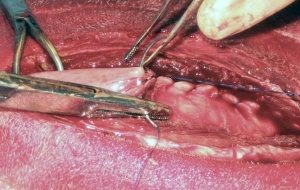