General treatment principles for nerve injuries include stall confinement with deep bedding. Sand is a good base as it is soft but provides stable footing. Steroids or NSAIDs are administered: dexamethasone @ 0.05 mg/kg, IM, every 1-2 days or flunixin meglumine @ 1 mg/kg, IM, q 12 h.

Many hindlimb nerve injuries are due to dystocia, particularly in cattle with oversized calves.  Many result in “downer cows” or cattle unable to stand voluntarily.

Seem immediately after calving and is often related to calf hip lock. Adductors are affected.  The animal will have a base wide stance or may not be able to stand without assistance. When the limb is placed properly, the animal can weight bear. The fetlocks may knuckle. Affected animals are prone to limb abduction, particularly on slippery surfaces. When sitting, the hindlimbs are often extended forward. Obturator paralysis can lead to hip dislocation.

The animal should be moved to an area with good footing.  Treatment may include hobbling the back legs to prevent splits (use hobbles placed above the fetlocks). There is a high risk of permanent damage due to ongoing damage to muscles and nerves.

Primarily seen  immediately after calving but can be seen with hip fractures or injections.  Persistent knuckling of fetlock and slight “dropping” of the hock is observed as the sciatic nerve innervates the muscles of the lower limb and is important in proprioception. Weight bearing is variably affected and may be due to other issues vs directly related to the sciatic nerve damage.

Seen primarily in cattle immediately after parturition or prolonged recumbency and is due to pressure ischemia over lateral stifle region. The fetlocks are hyperflexed with some animals walking on the dorsum of the fetlock. The animal can bear weight on the limb but the hock is overextended and the digit cannot be extended. Both hindlimbs are typically involved when it is related to prolonged labor. A slightly milder version of sciatic nerve damage. 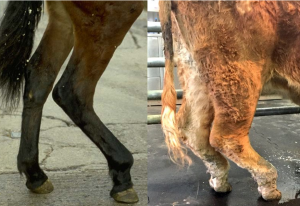 The femoral nerve may be damaged during dystocia; this is again most likely with hip lock but now the calf’s nerve is damaged. Due to loss of quadriceps function, the baby cannot extend the limb for weight bearing.  The patella is slack. Differentials to consider include hip fracture (femoral capital epiphyseal fracture) and hip luxation.

Prognosis is fair (depends on severity) but colostrum management is essential. Muscles will atrophy rapidly. NSAIDs may be helpful.

Sweeney is damaged to the nerve(s) around the scapula. Damage usually occurs due to pressure on the nerve or damage by fracture.

The brachial plexus or radial nerve is damaged when an animal or its forelimb is restrained and the animal struggles. It can also be seen with prolonged lateral recumbency.  With damage,  the elbow drops and the carpus and fetlock are maintained in partial flexion. Animals are unable to flex the shoulder or extend the lower part of the limb. Severe to non-weight bearing lameness with toe dragging may be seen. The animal can bear weight if the limb is splinted into a straight position. Differentials include humeral or olecranon fractures.

Most forelimb nerve injuries will improve rapidly.  Nerves regenerate slowly at ~1 inch/month. The closer the injury to the muscle it innervates, the better the prognosis. Muscles without nerve supply rapidly undergo atrophy so will need rehabilitation. It can take two years for full return to work.

If skin sensation is totally lost the prognosis is guarded. If the condition persists for more than 2 weeks, the damage is likely permanent.