The most common penile injury in breeding bulls is penile hematoma (broken penis). Rather than just a small vessel rupture, these are generally tunica albuginea ruptures. The amount of pressure in the bull’s erect penis is very high. If the bull bumps the cows flank, something has to give. The penis almost always ruptures at the base of the sigmoid flexure at the level of the retractor penis muscle attachments. It ruptures on the dorsal surface. This area is weaker due to the bending required. This results in a bleed on the dorsum of the penis with the size of the hematoma related to the amount of breeding attempted by the bull after the injury. 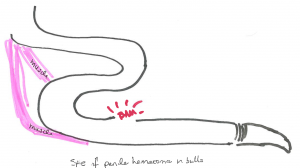 The dorsal nerve can be damaged either during the rupture or be entrapped by scar tissue during the healing. Some of these bulls will develop nerve damage with further breeding attempts as the tissue tears rather than stretches.

The tunic can fail to heal, leading to  loss of pressure in the corpus cavernosum and the inability to gain an erection.

The hematoma can become infected, turning into an abscess.

Adhesions can develop between the penis and sheath, creating phimosis or inability to extrude the penis.

The prepuce is often prolapsed due to limited space in the sheath and can get damaged.

Penile and preputial problems in the bull, MS Gill