While the cannon bone of a horse is MCIII or MTIII, in a cow it is a fused MCIII+IV or MTIII+IV. The fusion is present at the fetlock joint and above. Cattle do have the same bones and joints as horses below the fetlock but in duplicate form. There are four proximal sesamoid bones and two distal sesamoid bones on each limb. The fetlock joint is fused; the pastern and coffin joints are bilateral on each limb and separate. 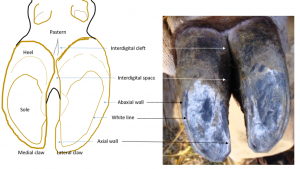 The deep flexor tendon attaches on the bottom of P3 at the flexor tuberosity. The pressure of this tuberosity creates sole ulcers. 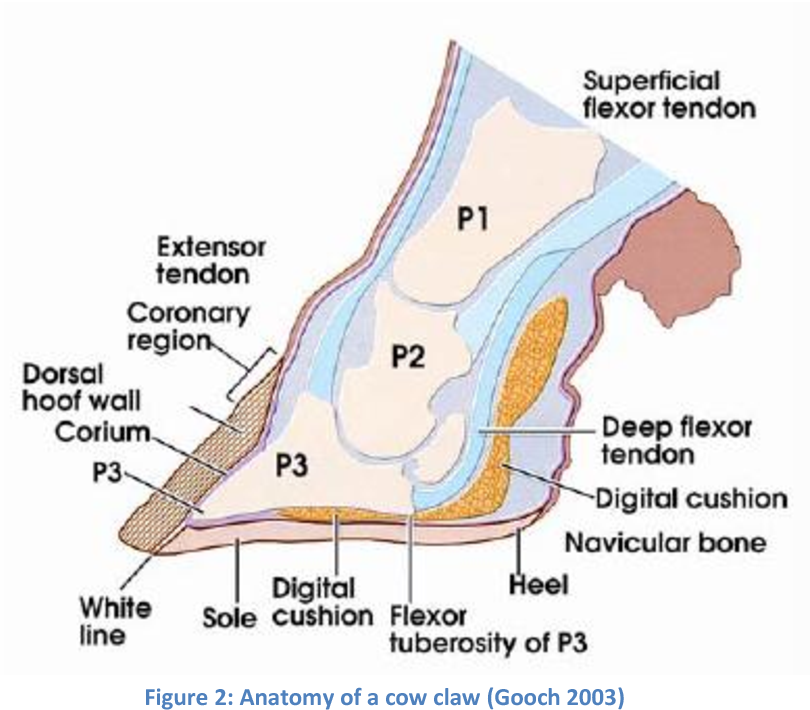 Per Cramer, the bovine foot is suspended by ligaments, rather than by laminae. So cows do not get laminitis but stretching of ligaments. Otherwise it sounds very similar! Most texts will refer to  “laminitis”.

As in the horse, the deep digital flexor tendon is surrounded by a tendon sheath as it passes caudal to the fetlock joint and inserts on the third phalanx. A navicular bursa helps it glide over the navicular bone. 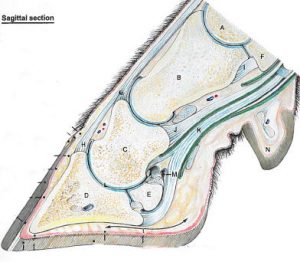 This close proximity to the foot predisposes the tendon and tendon sheath to ascending infections. The coffin joint is similarly predisposed. Infections in the interdigital space (foot rot) and in the digit (abscesses) will often migrate upwards.

To numb the foot for diagnostics or treatment, we often perform IV regional anesthesia

It is important to know the location of the veins so you can perform regional anesthesia (these are really hard to see on a live animal with a swollen limb). The best ones are dorsal and just in front of the dewclaws. The vessel can also be stabbed by injecting perpendicular  to the limb (parallel to the ground):