Limb fractures: a cause of non-weight bearing lameness. Limb fractures are considered an emergency and should be evaluated as soon as possible.

Some things that the owner can do while you are on your way include:

Supplies that you will potentially need in your truck:

When you arrive at the farm

If the horse is in stable condition and calm, complete a full physical exam (heart rate, respiratory rate, temperature, mucous membranes) to ensure that the horse is systemically well. Be mindful for signs of shock or colic.

If the horse is down / thrashing, sedate then reassess the situation. Additionally, you will likely need to sedate before starting manipulation or assessment of the traumatized limb. The sedation will also assist with analgesia, depending on the drugs used.

**The goal of sedation is that you should be able to complete an exam, manipulation, and stabilization of the affected limb without causing ataxia and increased risk of further injury. Physical restraint, such as a twitch or stocks, can also be useful, depending on the case.

Determine where the fracture is likely located and if there is any instability or laxity within the limb.  If there is a wound over the fracture location, it is considered an open fracture until proven otherwise, and should be treated as such.

Stabilization as quickly as possible is very important so the horse does not cause further injury to itself. Stabilization can help protect neuromuscular structures, prevent a closed fracture from becoming open, protect an open fracture from continued contamination, prevent further luxation, and prevent additional damage to the bones, cartilage, and surrounding tissues that will be needed for healing.

The goal of splinting is to prevent movement of the fracture in the medial-lateral direction and in the dorso-palmar or dorso-plantar direction. Splints should be placed perpendicularly. Additionally, the proximal limb will act like a pile driver and distract lower limb fractures. This is minimized by supporting the limb with the dorsal cortices aligned.

Splints: get creative! Broom or pitchfork handles, PVC pipes, metal pipes, pieces of wood, etc. are all reasonable options as long as they are safe and sturdy. There are also manufactured splints, such as the Kimzey splint, that is easy to use. 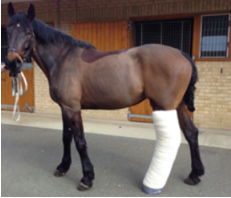 You can apply a cast, but that is more tedious, the horse must be completely still, and it will likely be removed immediately by the referral center. However, cast material is easy to carry in the truck and a bandage cast may be easier than splinting.

For fracture stabilization, the location of the fracture matters. 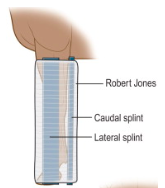 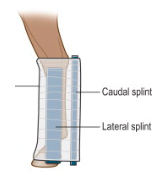 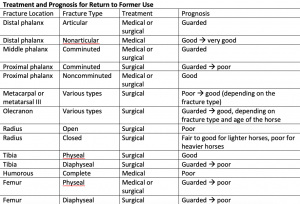 Palmer S.E. (2012). How to Stabilize Equine Fractures in the Field. AAEP Proceedings