Equine castration is performed to remove the aggression and attention deficits associated with stallions. 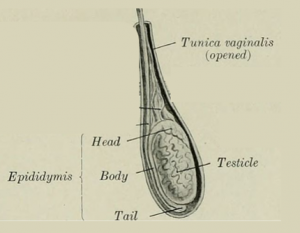 Ideally, food should be withheld for 6 hours. This is rarely performed but a heavy meal should be avoided.

Cord blocks are more challenging but more effective; lidocaine can also be injected directly into the testicle. Intra-testicular mepivacaine is likely to be more effective at relaxing the cremaster muscle.

Lateral or dorsal recumbency under general anesthesia (xylazine/ketamine/midazolam/GG or similar combination). Lateral recumbency is better for lung ventilation and can be done with fewer people. The upper hindlimb should be pulled forward to expose the testicles. 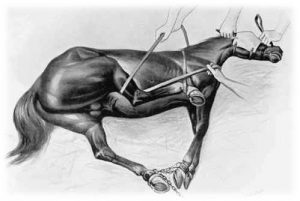 Dorsal can make it easier to identify and remove small testicles. Assistance is required for dorsal recumbency.

The scrotum is scrubbed and rinsed with alcohol before and after the local block is performed.
The surgeon cleans hands, applies an alcohol based sanitizer and gloves.

With open castrations, the cremaster muscle  can be cut or emasculated (emasculation is quick, easy and minimizes bleeding). Additionally, the ligament to the tail of the epididymis is torn or cut with scissors. The cord is tagged (grasped at the edge) with a hemostat to enable it to be recovered if bleeding is noticed. Avoid crushing vessels with the hemostat; that confuses the issue later when you want to make sure you have a good crush or ligature.

Optional : place a ligature (strangle knot, Millers, transfixation ligature) as far proximally as possible on the cord. This is much more difficult with closed castrations – note below how far the testicle can be exteriorized from the body in an open versus closed castration. 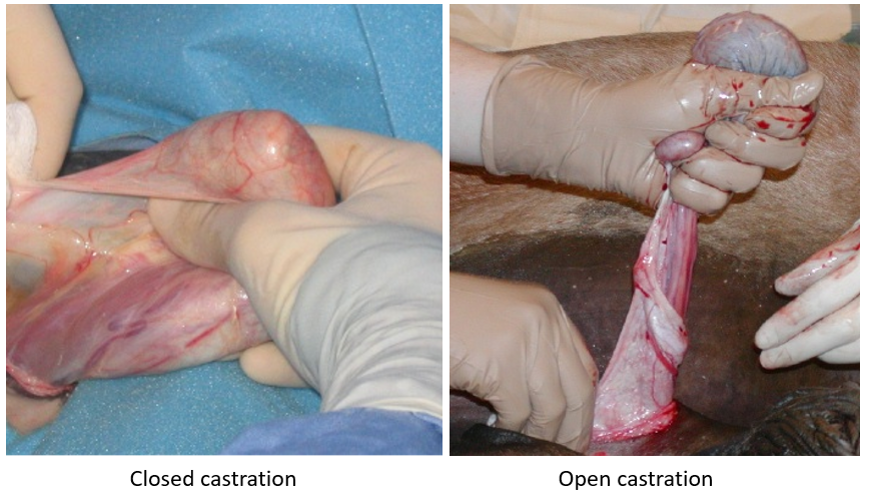 Repeat for the second testicle.

As the emasculators are removed, check for bleeding. Ligate or recrush if needed. Remove the hemostats and check again for bleeding.

Stretch the incisions to ensure good drainage. Optional : cut the median raphe so that if one incision closes, drainage is still possible. Note: this usually wakes the horse up.

Clean up the patient, replace the halter and recover.

Video on youtube. Note his “modified closed” technique is really an open castration and a better option vs modified closed (7:50 min)

You will find many contradictions and old wives tales in the literature, in practice and in the videos. These two articles “win” as far as being the most sound and evidence based. Start here for most efficient use of your time: