Lameness is a significant cause of economic loss in cattle and is often a herd problem. Bovine lameness is heavily underdiagnosed. In the Midwest, the level of lameness in cattle is 13-16%. Herdsmen recognize less than 1/2 of the cases.

Indicators of lameness in cattle are similar to those in horses but are evaluated at a walk. One of the most common findings is an arched back. Head weaving, head nods, changes in length of stride, limb deviation (abduction, adduction), limb asymmetries, pressure sores and weight shifts can also be identified. Cattle should be watched from a distance and when rising from a recumbent position. 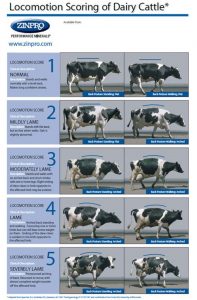 It can be useful to think of lameness as a herd outbreak and evaluate the environment and other predisposing factors. Treating the individual animal is often still necessary but is generally the tip of the iceberg.

The major factors involved with lameness in cattle are flooring surfaces, management protocols and diet.

Low BCS (<2.5) is associated with more foot issues (sole ulcers, white line disease),  more issues due to recumbency and likely less success in competing for food. If cattle are less able to get to the trough, this could create a vicious cycle in maintaining a low BCS.

Larger herds tend to be better managed but individual members less observed. While the overall health of the herd may be better, it can be easier for individual cow issues to be missed.

Cows with inadequate lying down time can overstress their feet, leading to sole ulcers.  Cows need to have access to their bedding/pen area at least every 3-4 hours. Cooling mechanisms need to be implemented to ensure heat stress doesn’t impact lying down time.

Slipping and sliding (from walking too fast) creates torque that can lead to white line damage. Cows should not have excessive walking time on concrete (particularly slippery concrete) and should not be rushed when walking.

Cows in the first four months of lactation are at higher risk of lameness issues, likely related to the large swings in husbandry, nutrition and environment that occur with calving. Cows producing large quantities of milk also tend to lose body condition.

Higher parity (more pregnancies) cows tend to have more foot issues, likely due to the cumulative trauma of the artificial surfaces and metabolic swings over time. The foot is also affected by ligament laxity – the pedal bone is primarily supported by ligaments in cattle vs the laminae.

An arched back is often seen with lameness in cattle.

Treat bovine lameness as a herd outbreak and look for management and environmental issues.

Minimize risks by keeping the environment clean and dry, removing sources of trauma and ensure cattle can move without being rushed or sliding around. Footbaths are useful to minimize bacterial infections (footrot, digital dermatitis).

Watch cattle BCS scores and lying down time. Identify groups with the most issues to best target management support.