Abomasal ulcers may bleed or perforate. Surgery is not advisable when a cow has a bleeding ulcer. However, ulcers are commonly associated with abomasal displacement so surgery may be unavoidable.

A cow with a ruptured abomasal ulcer may show signs similar to initially. Ruptured ulcers lead to localized peritonitis. Cattle are really good at walling off infections. In fact, they may go on to look perfectly normal. When you encounter an adhesion at surgery, LEAVE IT ALONE unless the cow will not survive without you breaking it down. You are likely going to open up an abscess. Similarly, we don’t flush the abdominal cavity in ruminants with peritonitis. All you are doing is dispersing the infection so the cow has to wall off multiple areas.

If the cow has a displaced abomasum along with an ulcer, the ulcer and resultant peritonitis may keep it from floating as high as it normally would. If you have low ping, worry about a ruptured ulcer!

At surgery, if the omental bursa is gas distended, assume you have a ruptured abomasal ulcer on the lesser curvature. Due to the omental leaves, the gas is trapped in the bursa.

When an ulcer is suspected, avoid tugging on the abomasum more than necessary. A right paramedian approach is recommended, as this will provide the best exposure to the abomasum and avoid extra manipulation. However, if the cow is anemic, the dorsal recumbency can be dangerous. If you are working from a right flank approach, do not pull the abomasum up any higher than necessary. Tack it lower than you usually would and let her recover.

Note: midlactation cattle with signs of abomasal ulceration should be checked for lymphosarcoma

are not common but may be seen with changes in feedstuff, after abomasal volvulus and with pyloric lymphosarcoma. Cattle with lymphosarcoma or with impaction after volvulus should be culled.

Abomasotomy is performed for abomasal impactions due to a change in feedstuff. It is performed with the animal sedated in left lateral recumbency. 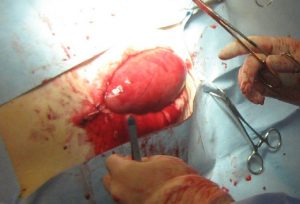 blockage or partial blockage of the intestinal lumen by feedstuff