Interdigital fibromas (corns) are growths (proliferative skin) in the interdigital space. The growths may be associated with foot rot.

How to recognize it?

Hairless mass between the digits, located at the dorsal aspect of the interdigital space and extending from the coronary band. It may become ulcerated and foul smelling. Debris can be trapped between the mass and the digits. Cattle may be lame. 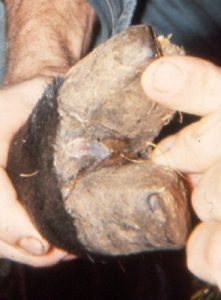 The growths develop due to overspreading of the digits, likely due to undeveloped ligamentous support. Herefords and Friesians are predisposed  and bulls more commonly affected than cows. Hindlimbs are affected most often.

Spirochetes have been found in the proliferative tissue.

How do you treat an interdigital fibroma?

The mass is removed. Cautery, cryosurgery and en bloc resection are all options. IVRA or perilesional anesthesia is performed. With en bloc, resection, hyperplastic tissues and the interdigital fat are removed using a wedge shaped incision. The foot is bandaged and the toes wired together. Antibiotics are given if infection is present.

Interdigital fibromas are hairless masses between the digits. These are most commonly found in the hindlimbs of bulls and develop due to excess spread of the digits. Treatment involves removal of the mass but the predisposing factors make recurrence possible.