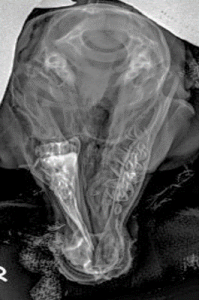 Choanal atresia occurs when the nasal passage fails to develop properly. Embryonically, the passage opens from both directions. With atresia, the passages fail to meet in the middle, leaving an obstruction. This means airflow does not reach the trachea from the nostril. If unilateral, symptoms are mild until the animals is older and/or exercising. If bilateral, it means a quick death for foals and respiratory distress for camelids. A candidate gene has been identified in camelids. Treatment is not recommended, affected animals should not be bred and the breeding that led to the cria should not be repeated. The contrast radiograph to the left (contrast inserted into the nostril) outlines the blind end of the nasal passage. 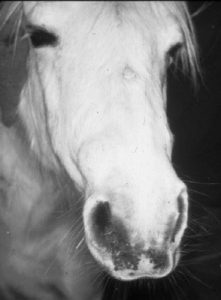 Nasal epidermal inclusion cysts occur in the false nostril (nasal diverticulum) of horses. These were previously identified as atheromas. While surgery was recommended in the past, the best treatment at this time is to inject the cyst with formalin. Formalin dries up the secretions and the dried out sack can removed digitally but usually falls out of the nostril on its own.

Conchal cysts are congenital anomalies that develop in the nasal conchae (scrollwork). These cysts can be very slow to develop and may not be identified until animals are adults. Clinical signs are associated with blockage of the nasal passage (lack of airflow, drainage issues) and deformation of the skull. Treatment involves surgical removal of the cyst, generally with a nasal flap procedure performed standing. A circular opacity can be seen in the center of the radiograph to the left. 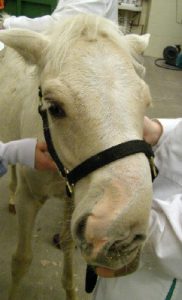 Wry nose is observed in newborn foals, calves and crias and is a severe malformation of the head. The nasal septum is deviated with malalignment of the jaws and teeth. Generally the maxilla is most affected. While surgery is possible to improve the condition, affected animals continue to have restricted airflow and problems with dentition. Nasal septum changes can also occur with trauma to the nose. Most affected animals are euthanized due to ongoing issues with breathing, chewing and dental related issues. 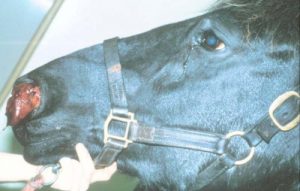 The most common nasal tumor is horses is a polyp, generally believed to develop from chronic irritation. Other tumor types can develop from the various tissues in the nose, including adenocarcinomas, adenomas, chrondromas, lymphosarcomas, osteosarcomas, and others. Enzootic nasal adenocarcinomas is a transmissible tumor of sheep and goats caused by a retrovirus. This tumor can occur in very young animals. Clinical signs include poor airflow/exercise intolerance, nasal discharge, nasal bone deformity and odor. Differentials for nasal tumors include granulomas and amyloidosis.

Disorders of the paranasal sinuses, Tremaine and Freeman

Diseases of the nasal passages in horses, Merck Manual