Laminitis  is inflammation of the laminae that attach to the coffin bone and interdigitate with insensitive laminae of the hoof wall. It is a painful condition that results from disruption of the dermo-epidermal junction within the hoof. Laminitis = founder.

Many different things cause laminitis and they probably don’t all cause it the same way (different pathophysiology). One major theory is vascular leakage and secondary swelling within the hoof capsule. Swelling and hoof rotation impair blood flow, leading to more damage via compartment syndrome effects. Other theories to explain laminitis include poor blood flow, vascular thrombosis, and abnormal keratinization.

In general, the toe region is the most damaged due to the limited vascular supply in that region.

Basically the laminae become inflamed, show inflammatory changes such as heat, pain, swelling and “loss of use”. Swelling in the foot is bad as there is nowhere for the swelling to go due to the hoof capsule. The capsule leads to compression of the swollen tissues and more damage. With loss of use, the laminae stop holding the coffin bone up in the hoof. The weight of the horse and the pull of the deep flexor tendon battle it out to see if the coffin bone will rotate or sink. Rotation occurs when the laminar inflammation (and loss of use) is primarily dorsal. The deep flexor tendon pulls on the coffin bone and the tip dives toward the ground. The laminae can heal, but are now pulled abnormally. This creates funky hoof growth.

With more severe laminar damage or more weight on the hoof, sinking can occur. Basically the coffin bone is set free and it sinks toward the ground. This is bad.

Sinking may be missed on radiographs as it is more subtle. Watch for a larger distance from the coronary band, less foot between the coffin bone and the ground, and visible air on radiographs (the laminae should keep air out).

As the coffin bone shifts downward from either rotation or sinking, a half moon shape or the tip of the bone may be visible on the bottom of the foot. This is not good. Survival is poor if the coffin bone is exposed. Saving these horses requires intensive prolonged hospitalization and is usually not successful. 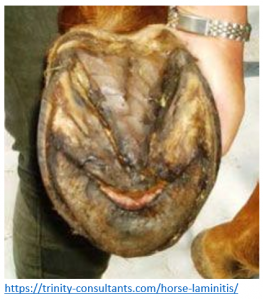 The famous racehorse, Barbaro, developed laminitis of his sound hind foot due to shifting weight off his fractured hind limb.  This “secondary” laminitis led to euthanasia.

Laminitis is a disease of adult horses. Foals do not usually put enough weight on the foot to cause laminitis. It may be more common in older horses, particularly associated with PPID.

Signs include increased heat near coronary band, pounding digital pulses, sensitivity to hoof testers around the hoof wall, reluctant to stand on that foot (have the other foot picked up), increased heart rate and signs of pain. Horses develop a “sawhorse” stance due to bilateral forelimb involvement since they are trying to unload weight from the front limbs. Horses may incessently weight shift in the stall. Laminitis leads to a “walking on eggshells” gait.

These horses will often have a  dished foot (the foot starts growing at a different angle due to rotation of the coffin bone), founder rings (rings around hoof wall), widening of the white line on the solar surface, changes in position of the coffin bone on radiographs, broken forward hoof-pastern axis, chronic pain, and chronic abscessation. Chronic laminitis may present as recurrent forelimb lameness.

Treatment is focused on the most likely pathophysiology. If swelling is a concern, we try to decrease swelling. If we are concerned about clotting, we try anti-clotting factors. Unfortunately, all of these look the same and we don’t yet know enough about what is happening inside the hoof. Therefore, horses tend to get a “shotgun” approach and we treat all possible forms.

All cases are going to require some form of analgesia. This is often NSAIDs but many require additional pain relief. Epidurals may help hindlimb laminitis (less common). Fentanyl patches, gabapentin, iv infusions of narcotics or ketamine,  and acupuncture have been used, among others.

Remove the inciting cause

Remove the inciting cause (retained placenta, black walnut shavings, etc). If the horse ingested too much grain or other toxins, mineral oil or activated charcoal may be administered via nasogastric tube to minimize absorption and speed transit. Metabolic syndrome should be addressed by weight loss and any indicated medications or feeding changes. Cushings disease should be treated.

Walking requires laminae to work hard to keep the pedal bone in position. If the laminae are dysfunctional or damaged, walking will only cause more damage. The horses should not be walked more than is absolutely necessary during the acute or inflamed stages.

Swelling inside the hoof capsule leads to more damage. Horses may be given DMSO or other agents to decrease swelling.  Ice therapy may also help with swelling. The hoof capsule can also be rasped to allow a bit more swelling. Currently we have moved away from more drastic hoof capsule removal (it used to be removed from the front of the hoof to allow swelling in the most commonly affected area).

Gravity is pushing the bone downward and the deep flexor tendon is pulling it around. We can relax the pull of the deep flexor tendon by elevating the heel in cases with rotation (this does not help cases of sinking). Counteracting gravity is challenging. In acute cases, builders styrofoam can be used to make a soft support that molds to the horses foot. 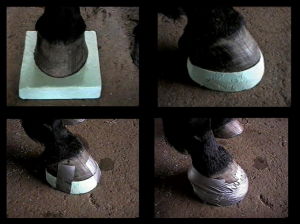 Sand or peat moss can work similarly.  “Lily pads” are rubber pads designed to support the frog and provide a small amount of heel elevation.  In severe cases without financial restrictions, horses can be placed in a sling to minimize weight bearing.

In more chronic cases, the foot is trimmed or shod  to enable easy turning or ““*. Heartbar shoes are designed to use the frog and heel for more weight bearing, removing some of the stress from the laminae. Shoes may also be applied backward to put more support in the heel and avoid pressure at the toe region. The EDSS (Equine digital support system shoe) is designed to flex based on the horse’s response. Farrier recommendations vary significantly over time!

Nailing a shoe on the foot is avoided in acute episodes. Glue on shoes or foot boots can be used to hold pads in place during inflammatory periods.

*breakover is the time from when the horse starts to take a step until the toe leaves the ground. A long toe leads to a longer breakover time.

With sluggish blood flow or constricted capillaries due to external swelling, clotting is involved in many forms of laminitis. Low dose heparin, aspirin (every other day) and other platelet mediators have been tried and are often used.

Acepromazine is used with the goal of vasodilation.

Even though walking would encourage blood flow, it is contraindicated in laminitis due to the related damage.

Surgery is considered in more chronic cases with significant rotation. The goal is to realign a rotated coffin bone so that the pull on the laminae is more normalized. Cutting the inferior check ligament may be sufficient in a few cases. In many cases, the deep flexor tendon is transected in the pastern region or in the mid-cannon bone region. This temporarily relieves the pull on the coffin bone. The tendon will heal so the surgery must be accompanied by appropriate farrier work to ensure it heals with the desired conformation.

Chronic cases are prone to hoof abscesses. Abscesses cause inflammation (inflammation = inflamed laminae= laminitis) and add to the damage. Any acute exacerbations should be evaluated to determine if it is recurrent laminitis (often bilateral) or a hoof abscess (often unilateral). Of course that inflammation tends to set off the laminitis in both feet (one is direct since inflammation of the laminae involved, the other foot indirectly due to increased weight bearing).

Other inciting factors should also be avoided (lush pastures, hard surfaces, grain overload) as these horses are at increased risk of recurrent laminitis.

Retained placenta, colitis, endotoxemia, excessive weight bearing due to a contralateral limb lameness, and excessive grain intake are all known to cause laminitis and are not uncommon in horses.

Prevention is key if the horse is at risk:

Prognosis is based on clinical signs, rate of change and amount of sinking (+/- amount of rotation if severe). Sinking is bad.

The prognosis is poor if you can’t pick up other foot, the horse needs continued large amounts of analgesics,  the pedal bone is sinking or is exposed at the sole, or if you can’t get rid of inciting cause.

Since horses are prone to recurrent laminitis, it is crucial to take radiographs early on in the diagnosis. The rate and severity of changes can help identify prognosis but you need to know the starting point. Most of these horses will suffer from chronic abscessation since the laminae don’t seal well and can’t keep bacteria out.

Diagnosing and treating laminitis in horses, Vet Record In Practice 2018

Pain management for laminitis in the horse, EVE 2019

Used in horses to describe the end of the stance phase:  the period of time from when the heel is off the ground to the time when the toe is off the ground. This time window is prolonged with long toes and when a horse is shod. A longer breakover requires more joint motion.