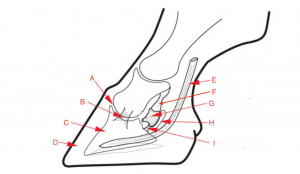 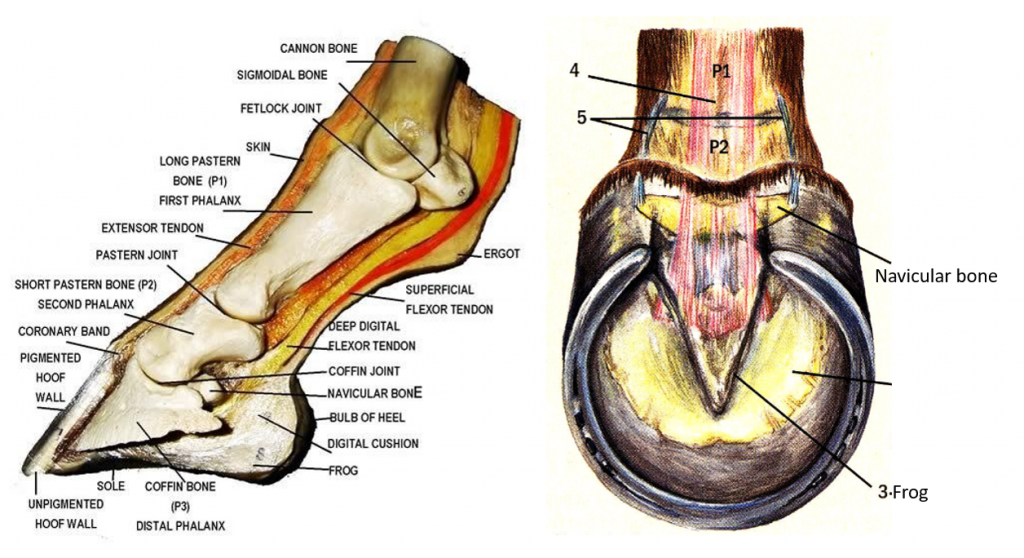 The equine foot= the hoof and its contents.  The problem with this definition is that if strictly interpreted, it would include only the distal parts of the collateral cartilages and P2.

Collateral cartilages are often referred to as the ungual cartilages but this is misleading because the cartilages are connected to P3 but not to the hoof (ungul- = hoof).    Instead, they are partially within the hoof.

Hoof balance = the object of proper trimming and shoeing.  If the foot is in perfect balance a sagittal plane through the foot will not only produce symmetrical halves of the foot, but also, the digit and cannon region.  Many authorities state that hoof imbalance is a common predisposing factor in lameness, especially of the foot.

Breakover = the point where the coffin (DIP) joint is flexed maximally and the foot lifts off the ground.    The longer the toe, the longer the time on the ground before break over occurs.  A long toe makes a smoother ride for the rider but can be harder on the horse.  Toe vs. heel length is another aspect of hoof balance.

Podium = the foot, Metapodium = adjacent to the foot = metacarpus or metatarsus = cannon bone plus both splint bones.

Capsule or hoof capsule  is another term for the hoof, farriers may use this term and they may refer to the collateral sulci as the valleys alongside the frog.

In theory, all the weight of the horse is borne by the hoof wall and hence the laminae.  This is why laminitis (founder) is so painful.  The frog and sole are soft and not made for weight bearing but will bear some weight on a soft surface, but not on a hard surface, especially if shod.  This may be the reason why hard surfaces are cited as one of the causes of foot lameness.  The sole is concave and may flatten some at the point of foot contact with the ground surface

600 = approximate number of laminae in a horse foot.  Due to numerous secondary laminae, the surface area for connection of the laminar dermis to the hoof is large.  Vessels of the laminar dermis have numerous arteriovenous anastomoses which are important in heat regulation and laminitis.  Cattle lack secondary laminae and much of their weight is born by the bulbs which would be considered “under-run” if similar heels were on a horse.

Hoof growth is very slow. Therefore, the older part of the wall is, the dryer and hence harder it is.  Since the toe is the longest part of the hoof, it is both thicker and less flexible than the heels.  On impact the wall bends in slightly near the coronet, especially at the heels.  Since the heels should remain flexible, horseshoe nails are only put in the toe and quarters, not the heels.

The collateral (ungual) cartilages are fibrocartilage and the digital cushion lies between them.  The digital cushion is a mixture of collagen, elastic tissue, adipose tissue and cartilage.  According to Dr. Robert Bowker at MSU, there are 2 extremes here and everything in between.

2. Thick UC and considerable fibrocartilage and collagen in the digital cushion. (Healthy foot.)

The navicular bone acts as a trochlea (pulley) around which the DDFT bends before inserting on P3.  Hence the navicular bursa = podotrochlear bursa.  Structural components of the navicular syndrome (podotrochleitis) are difficult to identify due to inconsistent findings from one case to another.  That is, structural changes such as seen with radiology don’t consistently correlate with clinical signs of navicular pain.

While there is but one impar (unpaired) ligament, the proximal (suspensory) ligaments of the distal sesamoid bone are paired.  They wrap about the pastern joint and attach to the distal end of the long pastern bone (P1).

The distal border of the navicular bone furnishes attachment for the distal sesamoidean impar ligament.  Dorsal to this, the distal border is exposed to the coffin joint as can be seen in sagittally split feet.  Since this border is frequently seen to have foramena on radiographs, the question has long been what is in the foramena.  Traditionally the foramena were referred to as vascular foramena but now it is thought that they may be filled with extensions of the synovial membrane of the coffin joint.    The following is the opinion of Bob Bowker, VMD, PhD at MSU, East Lansing, MI from e-mail to V. Cox, March 2000:

“The foraminae do contain blood vessels initially. But later I have not been able to see any. You made me think a bit as we have found that as the horses “age” (don’t think that it is related to age but rather that the stress in the region where the DDFT and the DSIL attaches onto P3 cause damage to microvessels.) I believe that with the reduction in the vasculature (others have shown in navicular horses that the blood flow changes from distal to proximal flow so that in navicular horses 75% enters proximally now versus 25% distally. (normal horse its just the reverse.) entering the distal edge of the navicular bone, there is bony remodeling within the navicular bone. Where the blood vessels are now absent there will be holes. Where they are there is no DSIL attaching to the navicular bone, which I think is the way it was before the fossae were formed. This can explain why there is a large hole on the flexor side of the bone in chronic cases (the overlap of the small arterial tree from the distal (75%) to proximal (25%) blood flow in normal horses shifts from a proximal (75%) to distal (25%) blood flow in navicular horses. I think that the synovial membrane merely is filling in the hole created by the new remodeled bone, i.e. hole.   The answer is more gray than black and white.” 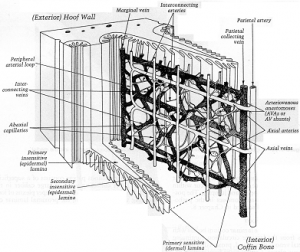 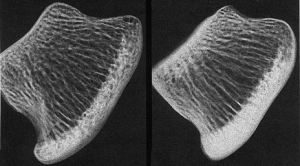