Penile translocation is performed as part of a teaser bull procedure. The goal is to minimize intromission and minimize disease transmission.

The preputial opening is moved above the flank fold so that the erection misses the vagina. The penis is not usually observed in this procedure.

The prepuce is minimally attached to the body wall. It can be readily dissected free.

Food restrictions: Withhold food 48 hours. Water should be withheld if the animal is drinking excessively.

Antibiotics: The procedure tends to be contaminated. Give preoperative antibiotics.

Position/preparation: The animal is positioned in dorsal recumbency. Inserting a long probe into the prepuce can help identify structures and minimize trauma to the sheath. 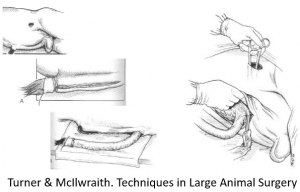