Ruminants tend to heal well and can heal even in situations that would be challenging for other species. Pigs can be crated and carried by their owners.

Since surgical repair has a good prognosis, the most crucial step is managing an injury so that it doesn’t worsen in the preoperative period. Fracture ends need to kept from rubbing on each other  (eburnating), puncturing skin, or damaging vessels or nerves. Tendon lacerations need to be kept from worsening.  Animals may need fluid therapy for shock or limb stabilization to prevent anxiety.

Many times, the stabilization method will serve as the repair method.

Casts are generally restricted to fractures below the tibia or radius due to difficulty casting the elbow or stifle joint. Occasionally a cast can be placed high enough in an alpaca to stabilize a radial fracture. Most of these are managed with a Schroeder-Thomas splint or with transfixation pin casts. Both of these options allow stabilization of tibial and radial fractures.

A transfixation cast uses pins placed across the bone and then incorporated in the cast to mimic an external fixateur. 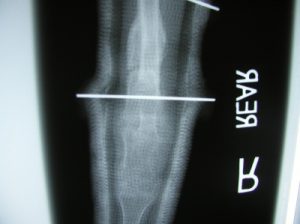 This splint places the limb in traction. The splint can be used when casting is not an option. It was designed for tibial fractures but can be modified for radial fractures. It tends to distract (worsen) humeral or femur fractures due to the location of the ring. 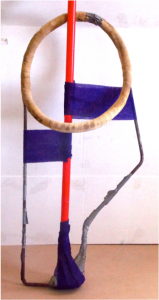 See manufacture and placement of this splint on a calf at Forest Hill Farm. The red stick represents the fractured limb. The splint is usually made out of aluminum tubing and secured with tape or casting material.

Humeral or femur fractures are typically stabilized by the upper limb musculature. These are managed by stall rest and supportive care (help the animal stand). In some cases, IM stack pinning may be used but the prognosis tends to be equivalent to supportive care. In a valuable animal intramedullary nails may be the treatment of choice.

Splints incorporated into bandages or heavy bandages are typically NOT sufficient support for initial healing. After the fracture callus has started to develop, a bivalved cast (splint) may be sufficient. Earlier than that, the bandage changes required will usually result in motion at the fracture line and poor healing.

Bones will not heal if insufficient blood supply, excessive motion or overwhelming infection.

Healing will be delayed or prevented if excessive motion exists. Internal fixation provides the most stability;  splints the least. Bone ends also need to override at least slightly. Too much distraction (separation) of the fracture ends will prevent appropriate callus formation.

Amputation is an option for most small ruminants if the fracture is unlikely to heal or isn’t healing.

Casts can also create cast sores. Prolonged casting will lead to severe osteoporosis in young animals. This weakened bone may fracture when the cast is removed.

Casts can create significant issues if not molded and cared for properly. Rub sores are created when casts are too loose and when the limb changes under the cast. Fit is best when cast padding is minimal. Cast padding rapidly compresses, leading to a loose cast. If the limb is very swollen when the cast is applied, a new cast will likely be needed in a few days (when the swelling decreases).

Rub sores are also created when the cast has ridges (eg where your fingers push inward) and when the cast cracks. Animals should be stall rested. Movement is discouraged as movement can lead to cast breakage. Cement (technovite) or inner tubing is placed on the bottom of the cast to prevent wearing through from friction from the stall flooring.

Over time, the cast will no longer fit properly due to limb (young animals), claw or hoof growth. As this happens, the cast is pushed upward, creating additional rub sores.

Rub sores can erode into tendons and joints if the cast is not removed and/or changed.

Casts should be checked twice daily. Rub sores will create heat in the cast. Exudate may attract flies to the cast. Inflammation will create swelling that localizes above the cast. The pain and the swelling will lead to lameness. If the cast is worn, broken, has exudate or flies, it should be removed as soon as possible. The same is true if swelling is developing above the cast or if the animal stops using the cast as well as it has been. Remember that your ability to detect changes under a cast is delayed so consider these emergencies.

Most casts placed on adults will last 4-6 weeks so only one cast is typically necessary. In some cases, another cast may be placed if needed for continued fracture healing.  In babies, the cast may need to be changed due to limb growth; on the other hand, these animals heal quickly.

The limb should be supported after the cast is removed to allow the limb structures to adjust to the modified weight bearing. Bones tend to become osteoporotic and ligaments lax. This will make animals prone to pathological fractures and joint issues (luxation, ligament tears).  If the cast is split longitudinally (medially and laterally), one or both halves can be used as a splint.  Splinting and support is gradually decreased over the next two weeks to allow bones, tendons and ligaments to adjust.

Blood flow is essential for fracture healing. If you don’t have blood flow, it won’t heal. Stability is next. The more stable the fracture ends, the better the healing.

Casts in hooved species should incorporate the foot and extend past the joint above the fracture to the proximal end of that bone.

Monitor casts for heat, pain, swelling above the cast, cracks and change in use. If noted, remove and/or change the cast ASAP.