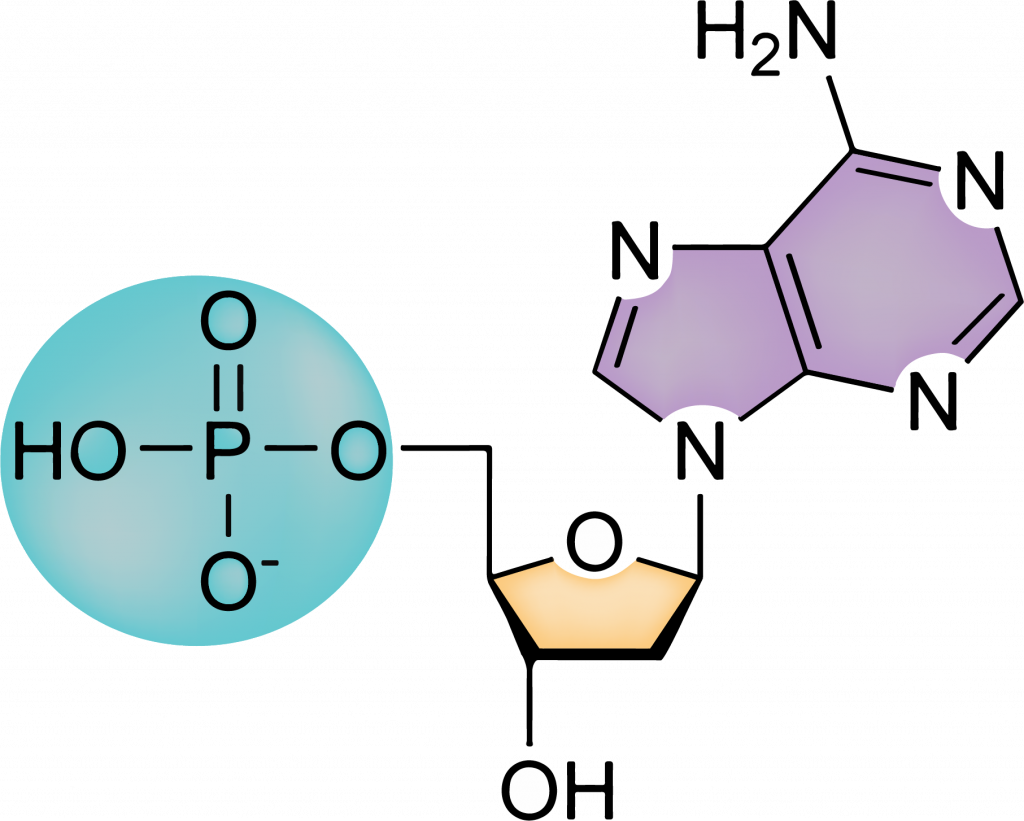 The structures of both DNA and RNA consist of a strand of alternating sugars and phosphate molecules (a phosphorus atom surrounded by 4 oxygen atoms) along the “backbone” of the molecule.  Attached to each sugar is a nitrogen-containing ring structure called a base.  One phosphate, sugar, and base bonded together make up a nucleotide.  These nucleotides join together to create the long stretch of nucleic acid that forms DNA or RNA.

In DNA there are four bases: guanine (G), adenine (A), thymine (T), and cytosine (C).  DNA exists as a double-stranded molecule, with two of these strands of nucleic acid paired together by interactions between the bases.  In DNA, the A’s pair with T’s and C’s pair with G’s.

If all of the DNA in a single human cell were stretched out, it would be about 6 feet long!  However, DNA in a human cell is packaged into 46 separate strands, or chromosomes.  These chromosomes spend most of their time in the cell in a messy (think plate of spaghetti) arrangement.

DNA is the molecule of inheritance for most biological organisms (there are some viruses that use RNA instead).  Your shared DNA with family members has a lot to do with shared characteristics you may have with your biological relatives.

RNA molecules are synthesized from a DNA template.  The RNA molecule is very similar to DNA in that it has a sugar-phosphate backbone (except in this case the sugar is ribose), and each sugar is linked to a base.  However, in RNA there is no thymine (T); instead RNA uses the related base uracil (U) in its place.  Also, RNA exists in a single strand.

See the video below for a comparison of DNA and RNA:

RNA is important for several functions that have to do with the linking of another class of biomolecules, amino acids, into a structure called a protein.