Frequently, males and females have conflicting strategies for maximizing their reproductive success. These conflicting optimal strategies typically arise over the mode and frequency of mating and can give rise to sexual conflict. Remember that males and females often make very different investments in reproduction with females producing just a few, nutrient-rich gametes over which they are often very protective. In contrast, males typically produce many, motile, and less nutrient-rich gametes. This difference in gamete production usually means that females optimize their reproductive success by mating with just a few, high quality males, while males optimize their reproductive success by mating with as many females as they can in their lifetime.

Sexual conflict can lead to the evolution of sexually antagonistic behaviors. For example, males benefit by mating with multiple females, but females typically do not benefit from frequent mating. Thus, females will often exercise extreme mate choice, and males will sometimes try to circumvent this mate choice by using forceful mating tactics and coercive behaviors to achieve reproductive success.

One such forceful-mating tactic, called traumatic insemination, occurs exclusively in invertebrates, and involves a male inserting his genitalia into the non-genital tissue of a female. Essentially a male will stab a female with his genitals and release sperm products directly into her blood stream- yikes! This behavior can lead to fertilization because in most invertebrates, like insects, blood and other fluids circulate together (in contrast to that of many other animals, including humans, in which blood circulates in a different system from other fluids). Following traumatic insemination, sperm can migrate through the blood stream to a female’s ovaries, resulting in fertilization. Most of the research on traumatic insemination has been carried out on bed bugs in which males have evolved knife-like genitals that can stab through the hard exoskeleton of a female and transfer sperm directly into her body cavity and blood stream.

While it is easy to see how this behavior benefits the male, traumatic insemination has been shown to reduce female fitness because the number of offspring produced via this process is typically less than the number produced via non-traumatic means. Because of the reduction in fitness, females have evolved behavioral and physiological adaptations in response to these forced copulation attempts.

Sexual conflict can also present in the form of coercive sexual behaviors. As the term coercive implies, these behaviors are not mutually beneficial to males and females, but they evolve because the behaviors confer some advantage to one sex. For example, in lions, mature males will sometimes kill the young offspring of a female they wish to mate with. This behavior, called infanticide, typically results in the mature male becoming the new sexual partner of the offspring’s mother, who would otherwise be unreceptive to a new mate. Once again, adaptations to counter this behavior have been observed. In lions, females will have multiple mates, confusing paternity for males in the population, making it difficult for a male to be certain that the offspring he kills are not his own.

The important thing to understand about sexual conflict is that this is often a cyclical process. This means that one sex may evolve a means for biasing reproduction in their favor (e.g. males attempting to mate more often by forcing females to mate with them), and in response, the other sex can evolve adaptations to shift reproduction back in their favor (e.g. females evolving refusal positions to counter attempts at forced copulation by males). Thus, this process is often referred to as an evolutionary arms race because any evolutionary change will only ever be relative progress. In other words, one sex might gain an advantage in the short-term, but no sex will have the upper-hand for the long-term. 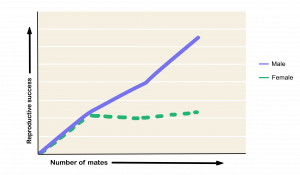