Punnett squares are visual tools to help us calculate the inheritance of a single trait, typically when given the parental genotypes. Each box in a simple matrix represents an array of potential genotypes for the offspring of two individuals.

For simplicity, Punnett squares are actually annotated with letters representing only the gene in question, rather than entire chromosomes. The letters outside the box represent the possible gametotypes (gamete genotypes) for each parent—one in the left column and one in the top row. In a monohybrid cross, whereby we’re focusing on inheritance probabilities for a single gene, a 2X2 matrix will be sufficient. Each parent will potentially pass down one of its two copies of the gene, creating up to four potential combinations. Upper- and lower-case letters are often used to represent different alleles. For example, an upper-case letter might denote a dominant allele, and a lower-case letter might denote a recessive allele.

The following Punnett squares track the inheritance of a gene for which the father has a mutation in only one of the copies of gene A, but the mother has no copies of the mutation. The mutated copy is denoted with a lower case a and the non-mutated, or wild-type, gene is denoted with an upper case A.  There is a 50% chance that each parent will pass on each of the two copies. The mother will always pass on her dominant A allele, so we expect that all their potential offspring will have at least one A. The father is equally likely to pass on either the wild type A or the mutated a; therefore half the potential offspring have a second A and are homozygous (they have two of the same alleles) AA, and the other half have a mutated a and are heterozygous (they have two different alleles) Aa. 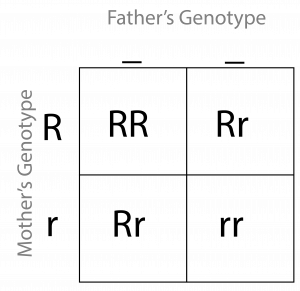