How much and when a protein is translated (or how much the gene is expressed) is regulated by sequences of DNA called “gene regulatory regions”. These non-coding portions of the DNA interact with proteins and increase or decrease the amount a protein is expressed. Differences in gene expression are why an individual’s skin cells are different than nerve cells (even though both cell types contain the same DNA).

Additionally, as illustrated by monogamous and non-monogamous voles, small differences in sequences in the regulatory regions of genes in different organisms can create very different phenotypes, even when the DNA sequences for the coding portion of the gene are identical! 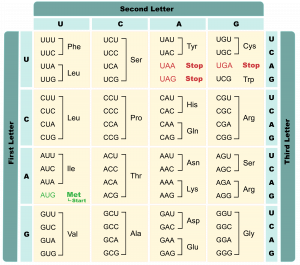 Which of the mutations in the previous question cause the greatest change in the resulting polypeptide? Be sure you can explain your answer.