Biogeography, the study of the distribution of living organisms, addresses several evolutionary questions: How many types of organisms exist? Why are some types of organisms (e.g. insects) more abundant than others (e.g. mammals)? Why do certain organisms live in some places and not others? Why do islands have such distinct biodiversity compared to the larger continents? Why aren’t there any polar bears in Antarctica? Why aren’t there any giraffes in Hawaii? And so on….

Likewise, an understanding of evolution helps us appreciate the otherwise-perplexing global distribution of marsupial mammals. Marsupials are mammals in which females transport their young in distinctive pouches throughout their early infancy. In contrast, placental mammals have placental gestation and young that are born at a more developed stage. Marsupial mammals, such as kangaroos, opossums, wombats, and wallabies, occur in North and South America, Australia, and New Guinea, whereas the more-numerous placental mammals dominate the rest of the world. How can we explain these odd distribution patterns? 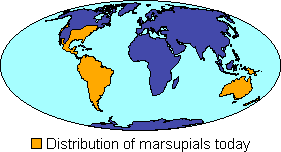 Knowledge of Earth’s history is key to biogeography and evolutionary understanding. Indeed, a consideration of continental drift—the movement of the continents, over geologic time, as a result of the movement of plates in Earth’s crust—is necessary to understand marsupial biogeography (figure 7). We also know, from fossil evidence, that marsupials originated over 150 million years ago in China, at a time when the Asian and North American landmasses were joined. Marsupials dispersed to South America, and from there to Antarctica and Australia, both of which were attached to South America. When Australia, Antarctica, and South America drifted apart, each landmass carried a population of marsupial mammals. Over time, Australia’s marsupials evolved into the bandicoots, kangaroos, koalas, and other marsupials that inhabit the continent today. When Australia moved closer to Asia, about 15 million years ago, placental mammals such as rats and bats colonized the landmass.

The mystery of ape testes

In addition to homologies, analogies, and vestigia, comparative anatomy can inform our understanding of evolution by simply shedding light on which structures are most important in which organisms. For example, a comparison of great-ape genitalia can be an interesting exercise. The great apes include the gorillas, orangutans, chimpanzees, and humans. The great apes are unified by several shared derived traits, including bone structures that enable us to walk upright (although the non-human apes can only do so for a few steps at a time), opposable thumbs, three-dimensional vision, and large brains. We differ, however, in several features, including our mating habits.

Male gorillas fight amongst themselves—sometimes to the death—for dominance in a community; the dominant male then enjoys a harem of sexually available females. Chimpanzees are promiscuous, with both males and females copulating with several other chimpanzees in a single day. And then there are the humans, exhibiting various mating strategies (from harem-building to serial monogamy to life-long monogamy) that appear to be somewhat dependent on culture. But what was the original human mating system? Did we come from an ancestral human that was monogamous, promiscuous, or somewhere in between?

The answer may lie partly in the testes, where sperm are produced in a sac-like scrotum hanging outside of the male’s body. Animals display considerable variability in testis size. For example, within bats, testes volume varies greatly among species: the yellow-winged bat’s testes make up only 0.11% of the bat’s total body mass; in contrast, the Rafinesque’s big-eared bat has testes that make up 8.38% of its body mass (why is it called the big-eared bat anyway?) And in the great apes, chimp males have the largest testes, relative to body size; gorillas have the smallest. For the promiscuous chimps, large testes may be mandated by sperm competition, whereby males must compete, through their sperm, for access to the female’s limited supply of eggs. If a female mates with several males, each individual male is thrust into competition with the others, and no male can compete without an ample supply of sperm. This demand for more sperm is met by larger testes. Sperm from gorilla males, on the other hand, do not need to compete with sperm from other males, once a male gorilla has established dominance and secured a harem of available females no other males are mating with the females, therefore reducing advantage of producing huge quantities of sperm. A reduced demand for sperm appears to have resulted in smaller testes.

Human males have testes that sit somewhere in between those of the gorilla and those of the chimpanzee. What does this type of comparative anatomy tell us about our ancestral mating habits? We certainly don’t appear to have been as promiscuous as the chimps, but we probably can’t rule out sperm competition altogether. Human testes size, together with other evidence of our evolution, suggests that we have functioned somewhere in between the two extremes. Perhaps we have been largely monogamous, with low—but significant—levels of extra-pair copulation (or “cheating”).

Interesting tales of ape genitalia don’t end with the testes. The human penis is remarkable in being much longer, relative to body size, than the penis of the other great apes. An interesting observation and a story for another time…