Belgian biologists conducted a series of experiments with the damselfly Ischnura elegans. They began by allowing individual males the opportunity to choose between a single male and a single female, and then recorded the sex of the damselflies chosen by the males for copulation. The majority of the males (49/60) chose females in these initial choice experiments. Then, each male was marked and these individual, “focal” males were, one by one, placed in an enclosure for two days with 20 other males. After two days, each focal male was given a choice between another individual male and an individual female, and the focal male’s copulation choices were recorded. In these second choice experiments, the majority of the males (40/53) chose to attempt copulation with other males.

These findings best support which of the following hypotheses for the evolution or occurrence of homosexuality?
Kin selection
Practice
Enhanced family fertility
Mistaken identity
Prison effect

In their study of the impact of male-male courtship in the fruit fly (Drosophila melanogaster), Scott McRobert and Laurie Tompkins note that “we have shown that D. melanogaster males that are courted [by males] when they are young subsequently copulate more quickly with females than do males that never elicited courtship [by other males]. The ability to copulate quickly is advantageous in these animals, and can lead to greater reproductive success. These findings lend support for which of the following hypotheses?

One study looked at family fertility data from homosexual and heterosexual males in Spain, Italy, and France.  Consider the data in the following figure: 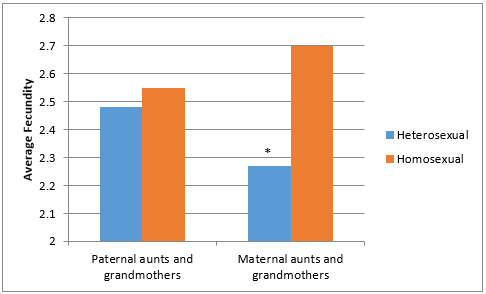 From (Camperio Ciani and Pellizzari 2012)

Hopefully it is clear, from the examples above, that attributing “causality” to a single factor as a way to understand homosexuality is complicated, and probably misguided. Rather, we may come to realize that sexual orientation is influenced by many factors that are themselves context-dependent. No doubt our understanding of the origins of sexuality will develop rapidly in the near future.