Saying that DNA codes for proteins may seem a bit anti-climactic. After all, DNA is made out to be such a big deal in the news, television crime shows, paternity tests and= evolutionary stories. Surely it does more than just code for proteins!

DNA’s importance is clear if you appreciate the diversity of protein types. Proteins can be structural components of a cell or act as cellular machines in the body. For a few examples:

Structural proteins include keratin, which strengthens hair, beaks, and feathers, and collagen, which is the main component of connective tissue and the most abundant protein in mammals.

Hormone proteins serve as messengers in the body. For example, oxytocin signals muscles of the uterus to contract during childbirth. Oxytocin is also involved in releasing milk for nursing infants, and has recently been studied for its roles in pair bonding, orgasm, and maternal behavior.

Transport proteins, such as hemoglobin, move molecules around in the body. Hemoglobin in your red blood cells transports oxygen throughout your bloodstream.

Enzyme proteins facilitate, or catalyze, chemical reactions in your body. For example, lactase is an enzyme that breaks down milk sugars. Another enzyme, aromatase, plays a key role in the synthesis of estrogens (sex hormones that are not proteins).

Pigment proteins absorb and reflect wavelengths of light selectively. The result is perceived as color. Melanin is a pigment protein responsible for human skin, eye, and hair color.

Contractile proteins such as actin and myosin orchestrate your muscle movement.

Antibody proteins are produced by the cells of your immune system to attack and destroy foreign invaders such as viruses and harmful bacteria.

Again, structure is key to protein function. Stringy, rope-like collagen is an excellent support protein, while the specific conformation of sex-hormone binding protein allows it to bind sex hormones in the body.

When it comes to proteins and sneaky sex schemes, male fruit flies deserve special recognition. In general, male fruit flies and virgin female flies like to sleep, enjoying long
afternoon siestas that conserve energy and reduce exposure to predators and the sun. But after sex, females forego the siesta and increase their time foraging. This practice presumably allows the females to meet the energetic demands of producing eggs and supporting developing young. And it appears to be prompted by a “sex peptide,” a protein that males produce and release with sperm in the ejaculate. So, fruit fly males have a gene that is expressed as a protein that doesn’t affect the male directly—rather, the protein encourages his sex partner to stay awake, eat more, and provide for his young.Do other organisms produce proteins that target their sexual partners? Can you think of any examples? How might the genes for these proteins have evolved? 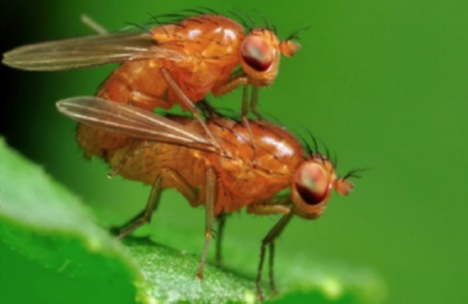