In 2008, the media were abuzz with reports such as “Monogamy gene found in people.” Given the benefits of monogamy, and our social fascination with cheating mates, identifying a gene for monogamy would certainly be newsworthy. But how could a gene lead to monogamy?

Consider the prairie vole and the mountain vole, two species of small rodents found throughout North America. Unlike most mammals, prairie voles exhibit monogamous behavior, forming lifelong pair bonds, caring for each other and sharing pup-raising duties. Mountain voles do not form pair bonds. The males exhibit no parental care and the females abandon their pups after a short lactation period. The two vole species are over 99% genetically identical, so the key to their different mating systems must reside in the remaining 1%. 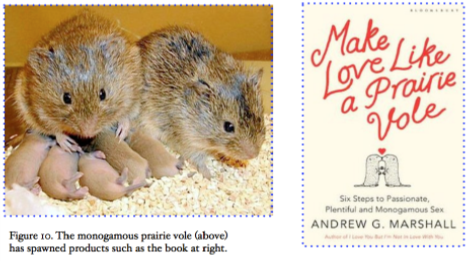 But what about another mammal, human beings? Do humans have similar genetic mechanisms affecting pair- bond formation? This is where the 2008 study, mentioned above, comes into play. Hasse Walum and colleagues interviewed 552 people about the quality of their relationships and analyzed their vasopressin receptor genes. They found that, like the voles, men with a specific genetic variant in the regulatory region of the vasopressin receptor gene were less likely to be married and, if they were married, more likely to report marital problems than were their counterparts lacking this variant.

The authors of this study concluded their paper by noting that the presence of these associations “clearly does not mean that this polymorphism may serve as a predictor of human pair- bonding behavior on the individual level.” That is, these genetic differences aren’t everything: many men with the gene variant are happily married, and many without the variant report relationship problems. Also, numerous environmental influences affect fidelity. Some human cultures place a higher premium of monogamy, with subtle or overt penalties for those who cheat on a spouse. Couples who have sex regularly are more likely to stay together than those who have sex only occasionally (the amount of sex a pair has is itself influenced by age, economics, and general health). In sum, maintaining monogamy is complicated, and fidelity (like so many natural phenomena) is the result of a complicated mix of biological and/or environmental influences.

Looking at these data, what do you think? Can these data be used to support our hypothesis, or not? In other words, do these data meet our prediction?