To help understand how modern society developed, sociologists find it useful to distinguish societies according to their type of economy and technology. One of the most useful schemes distinguishes the following types of societies: hunting-and-gathering, horticultural, pastoral, agricultural, and industrial (Nolan & Lenski, 2009). Some scholars add a final type, postindustrial, to the end of this list. We now outline the major features of each type in turn. Table 5.1 “Summary of Societal Development” summarizes these features.

Beyond this simple summary of the type of life these societies lead, anthropologists have also charted the nature of social relationships in them. One of their most important findings is that hunting-and-gathering societies are fairly egalitarian. Although men do most of the hunting and women most of the gathering, perhaps reflecting the biological differences between the sexes discussed earlier, women and men in these societies are roughly equal. Because hunting-and-gathering societies have few possessions, their members are also fairly equal in terms of wealth and power, as virtually no wealth exists.

Horticultural and pastoral societies both developed about 10,000–12,000 years ago. In horticultural societies, people use hoes and other simple hand tools to raise crops. In pastoral societies, people raise and herd sheep, goats, camels, and other domesticated animals and use them as their major source of food and also, depending on the animal, as a means of transportation. Some societies are either primarily horticultural or pastoral, while other societies combine both forms. Pastoral societies tend to be at least somewhat nomadic, as they often have to move to find better grazing land for their animals. Horticultural societies, on the other hand, tend to be less nomadic, as they are able to keep growing their crops in the same location for some time. Both types of societies often manage to produce a surplus of food from vegetable or animal sources, respectively, and this surplus allows them to trade their extra food with other societies. It also allows them to have a larger population size than hunting-and-gathering societies that often reaches several hundred members. 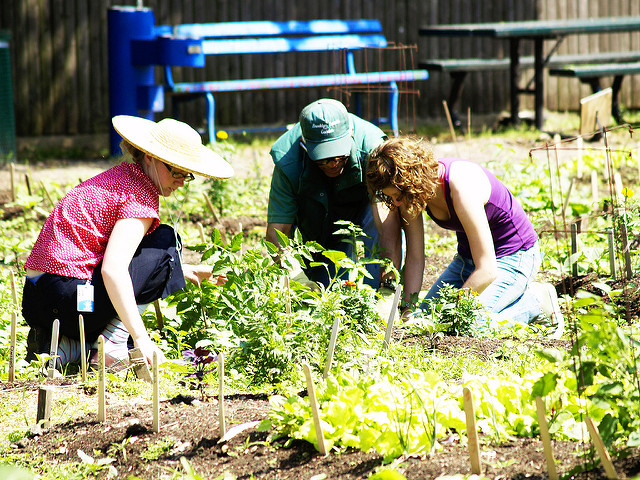 Horticultural societies often produce an excess of food that allows them to trade with other societies and also to have more members than hunting-and-gathering societies.

We have already seen that the greater food production of horticultural and pastoral societies led them to become larger than hunting-and-gathering societies and to have more trade and greater inequality and conflict. Agricultural societies continue all these trends. First, because they produce so much more food than horticultural and pastoral societies, they often become quite large, with their numbers sometimes reaching into the millions. Second, their huge food surpluses lead to extensive trade, both within the society itself and with other societies. Third, the surpluses and trade both lead to degrees of wealth unknown in the earlier types of societies and thus to unprecedented inequality, exemplified in the appearance for the first time of peasants, people who work on the land of rich landowners. Finally, agricultural societies’ greater size and inequality also produce more conflict. Some of this conflict is internal, as rich landowners struggle with each other for even greater wealth and power, and peasants sometimes engage in revolts. Other conflict is external, as the governments of these societies seek other markets for trade and greater wealth.

If gender inequality becomes somewhat greater in horticultural and pastoral societies than in hunting-and-gathering ones, it becomes very pronounced in agricultural societies. An important reason for this is the hard, physically taxing work in the fields, much of it using large plow animals, that characterizes these societies. Then, too, women are often pregnant in these societies, because large families provide more bodies to work in the fields and thus more income. Because men do more of the physical labor in agricultural societies—labor on which these societies depend—they have acquired greater power over women (Brettell & Sargent, 2009). In the Standard Cross-Cultural Sample, agricultural societies are much more likely than hunting-and-gathering ones to believe men should dominate women (see Figure 5.2 “Type of Society and Presence of Cultural Belief That Men Should Dominate Women”).

Figure 5.2 Type of Society and Presence of Cultural Belief That Men Should Dominate Women

Industrial societies emerged in the 1700s as the development of machines and then factories replaced the plow and other agricultural equipment as the primary mode of production. The first machines were steam- and water-powered, but eventually, of course, electricity became the main source of power. The growth of industrial societies marked such a great transformation in many of the world’s societies that we now call the period from about 1750 to the late 1800s the Industrial Revolution. This revolution has had enormous consequences in almost every aspect of society, some for the better and some for the worse.

On the negative side, industrialization meant the rise and growth of large cities and concentrated poverty and degrading conditions in these cities, as the novels of Charles Dickens poignantly remind us. This urbanization changed the character of social life by creating a more impersonal and less traditional Gesellschaft society. It also led to riots and other urban violence that, among other things, helped fuel the rise of the modern police force and forced factory owners to improve workplace conditions. Today industrial societies consume most of the world’s resources, pollute its environment to an unprecedented degree, and have compiled nuclear arsenals that could undo thousands of years of human society in an instant.

We are increasingly living in what has been called the information technology age (or just information age), as wireless technology vies with machines and factories as the basis for our economy. Compared to industrial economies, we now have many more service jobs, ranging from housecleaning to secretarial work to repairing computers. Societies in which this transition is happening are moving from an industrial to a postindustrial phase of development. In postindustrial societies, then, information technology and service jobs have replaced machines and manufacturing jobs as the primary dimension of the economy (Bell, 1999). If the car was the sign of the economic and social times back in the 1920s, then the smartphone or netbook/laptop is the sign of the economic and social future in the early years of the 21st century. If the factory was the dominant workplace at the beginning of the 20th century, with workers standing at their positions by conveyor belts, then cell phone, computer, and software companies are dominant industries at the beginning of the 21st century, with workers, almost all of them much better educated than their earlier factory counterparts, huddled over their wireless technology at home, at work, or on the road. In short, the Industrial Revolution has been replaced by the Information Revolution, and we now have what has been called an information society (Hassan, 2008).

As part of postindustrialization in the United States, many manufacturing companies have moved their operations from U.S. cities to overseas sites. Since the 1980s, this process has raised unemployment in cities, many of whose residents lack the college education and other training needed in the information sector. Partly for this reason, some scholars fear that the information age will aggravate the disparities we already have between the “haves” and “have-nots” of society, as people lacking a college education will have even more trouble finding gainful employment than they do now (W. J. Wilson, 2009). In the international arena, postindustrial societies may also have a leg up over industrial or, especially, agricultural societies as the world moves ever more into the information age.