As with many topics in sociology, understanding what happens in other societies and cultures helps us to understand what happens in our own society. This section’s discussion of health and health care across the globe, then, helps shed some light on what is good and bad about U.S. health and medicine.

International Disparities in Health and Illness 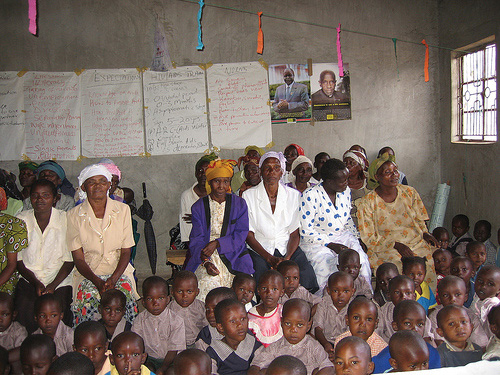 Two-thirds of the 33 million people worldwide who have HIV/AIDS live in sub-Saharan Africa. This terrible fact illustrates just one of the many health problems that people in poor nations suffer.

khym54 – AIDS Orphans and their Guardians in Sophia Village – CC BY 2.0.

The nations of the world differ dramatically in the quality of their health and health care. The poorest nations suffer terribly. Their people suffer from poor nutrition, unsafe water, inadequate sanitation, a plethora of diseases, and inadequate health care. One disease they suffer from is AIDS. Some 33 million people worldwide have HIV/AIDS, and two-thirds of these live in sub-Saharan Africa. Two million people, most of them from this region, died in 2008 from HIV/AIDS (World Health Organization, 2010). All of these problems produce high rates of infant mortality and maternal mortality and high death rates. For all of these reasons, people in the poorest nations have shorter life spans than those in the richest nations.

Figure 18.2 Percentage of Population With Access to Adequate Sanitation Facilities, 2008 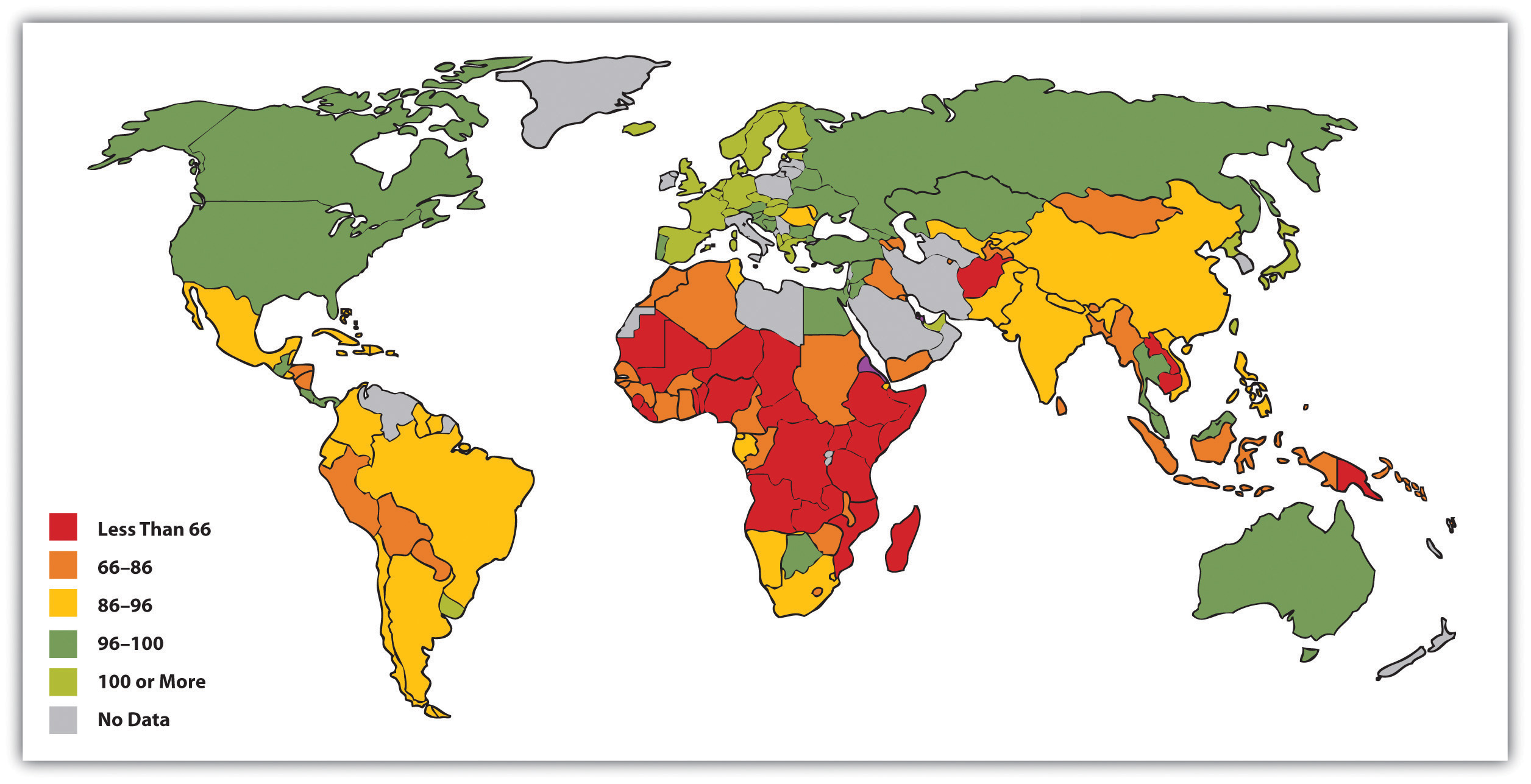 Chapter 9 “Global Stratification” presented an international map on life expectancy. That map was certainly relevant for understanding aging around the globe but is also relevant for understanding worldwide disparities in health and health care. We reproduce this map here (see Figure 18.3 “Average Life Expectancy Across the Globe (Years)”). Not surprisingly, the global differences in this map are similar to those for adequate sanitation in the map depicted in Figure 18.2 “Percentage of Population With Access to Adequate Sanitation Facilities, 2008”. North America, Western Europe, Australia, and New Zealand have much longer life expectancies (75 years and higher) than Africa and Asia, where some nations have expectancies below 50 years. The society we live in can affect our life span by more than a quarter of a century. 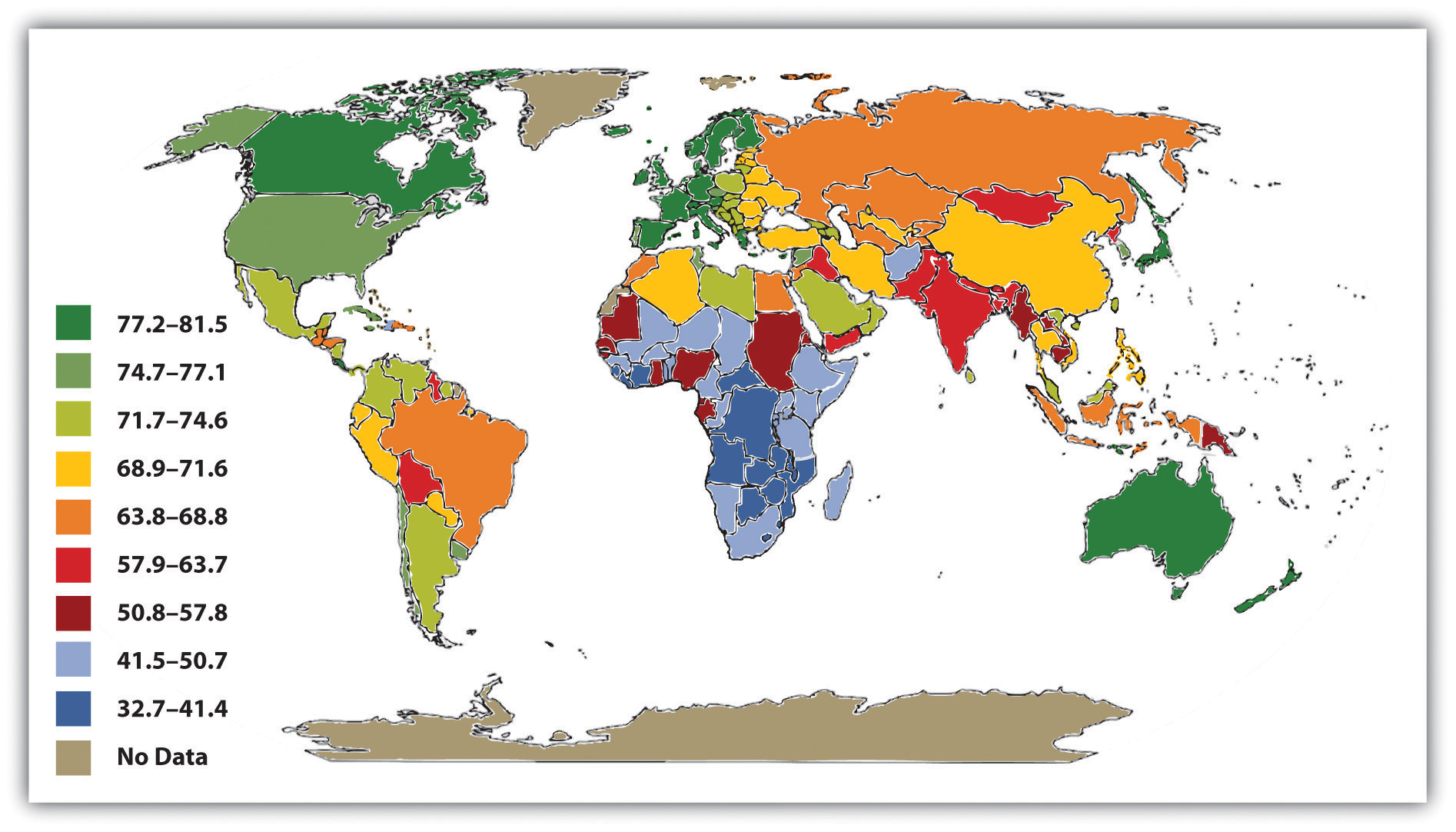 Industrial nations throughout the world, with the notable exception of the United States, provide their citizens with some form of national health care and national health insurance (Reid, 2009). Although their health-care systems differ in several respects, their governments pay all or most of the costs for health care, drugs, and other health needs. In Denmark, for example, the government provides free medical care and hospitalization for the entire population and pays for some medications and some dental care. In France, the government pays for some of the medical, hospitalization, and medication costs for most people and all of these expenses for the poor, unemployed, and children under the age of 10. In Great Britain, the National Health Service pays most medical costs for the population, including medical care, hospitalization, prescriptions, dental care, and eyeglasses. In Canada, the National Health Insurance system also pays for most medical costs. Patients do not even receive bills from their physicians, who instead are paid by the government.

Although these national health insurance programs are not perfect—for example, people sometimes must wait for elective surgery and some other procedures—they are commonly credited with reducing infant mortality, extending life expectancy, and more generally for enabling their citizenries to have relatively good health. In all of these respects, these systems offer several advantages over the health-care model found in the United States (Hacker, 2008) (see the “Learning From Other Societies” box).

As the text discusses, industrial nations other than the United States provide free or low-cost health care to their citizens in what is known as national (or universal) health insurance and national health care. Although the United States spends more per capita than these nations on health care, it generally ranks much lower than they do on important health indicators. Of 23 wealthy nations from North America, Western Europe, and certain other parts of the world (Australia, Japan, New Zealand; the exact number of nations varies slightly by indicator), the United States has the lowest life expectancy and the highest infant mortality and rate of diabetes. It ranks only 21st in mortality from heart disease and stroke and only 15th in dental health among children. The United States also ranks lowest for annual doctor consultations per capita and among the highest for hospital admissions for various conditions, such as congestive heart failure, that are avoidable with adequate primary and outpatient care (Organisation for Economic Co-operation and Development, 2009). The conclusion from these international comparisons is inescapable:

Although the United States spends more on health care than other countries with similar per capita income and populations, it has worse health outcomes, on average.…Compared to the United States, other countries are more committed to the health and well-being of their citizens through more-universal coverage and more-comprehensive health care systems. (Mishel, Bernstein, & Shierholz, 2009, pp. 349, 353)

Because of Canada’s proximity, many studies compare health and health-care indicators between the United States and Canada. A recent review summarized the evidence: “Although studies’ findings go in both directions, the bulk of the research finds higher quality of care in Canada” (Docteur & Berenson, 2009, p. 7).

Surveys of random samples of citizens in several nations provide additional evidence of the advantages of the type of health care found outside the United States and the disadvantages of the U.S. system. In surveys in 2007 of U.S. residents and those of six other nations (Australia, Canada, Germany, the Netherlands, New Zealand, and the United Kingdom), Americans ranked highest in the percentage uninsured (16% in the United States compared to 0%–2% elsewhere), highest in the percentage that did not receive needed medical care during the last year because of costs, and highest by far in the percentage that had “serious problems” in paying medical bills in the past year (Schoen et al., 2007).

World Health Organization. (2010). WHO and HIV/AIDS. Retrieved from http://www.who.int/hiv/en/index.html.