A key component of the U.S. economy is the defense industry. The military in the United States involves not just the armed forces but also some of the largest corporations that receive billions of dollars in defense contracts, as well as the government leaders who approve large military budgets to fund these contracts.

The military has played a fundamental role in some of the most significant events of the last 100 years and beyond. One of these, of course, was World War II. This war was what we now call “the good war.” Millions died on the battlefield, in cities bombed by planes, and in concentration camps, and in the end Hitler and his allies were defeated. About 20 years after World War II ended, the United States began fighting another war meant to save the world for democracy, but this war was very different from the one against Hitler. This war was fought in Vietnam, and however a noble effort World War II might have been, the Vietnam War was just as ignoble to its critics. It was a war, some said, not to save the world for democracy but to help extend America’s power where it did not belong. If the World War II generation grew up with a patriotic love for their nation, the Vietnam War generation grew up with much more cynicism about their government and about the military.

Ironically, that generation’s concern about the military was shared by none other than President Dwight D. Eisenhower, who warned about the dangers of what he called the military-industrial complex in his farewell presidential address. Eisenhower himself had been a member of the military-industrial complex, having served as a five-star general and supreme commander of the Allied forces in Europe during World War II and head of Columbia University before becoming president. His military experience made him no fan of warfare, as he once observed, “I hate war as only a soldier who has lived it can, only as one who has seen its brutality, its futility, its stupidity.” He also feared that the military-industrial complex was becoming too powerful and gaining “unwarranted influence” over American life as it acted for its own interests and not necessarily for those of the nation as a whole. He warned that the “potential for the disastrous rise of misplaced power exists and will persist” (Eisenhower, 1960, p. A1).

Eisenhower’s fears about the military-industrial complex reflected his more general concern about militarism, or an overemphasis on military policy and spending, which he thought was costing the nation far too much money. In a remarkable and now famous statement made early in his presidency in April 1953, Eisenhower (1960) declared,


Every gun that is made, every warship launched, every rocket fired, signifies in the final sense, a theft from those who hunger and are not fed, those who are cold and are not clothed. This world in arms is not spending money alone. It is spending the sweat of its laborers, the genius of its scientists, the hopes of its children. This is not a way of life at all in any true sense. Under the clouds of war, it is humanity hanging on a cross of iron.

A half-century after Eisenhower made this statement, U.S. military spending continues unabated. In 2009 it was $767 billion (including $92 billion for veterans’ benefits) and accounted for almost 22% of all federal spending (U.S. Census Bureau, 2010) but also for a much higher percentage of federal spending over which the government has any control. The federal budget includes both mandatory and discretionary spending. As the name implies, mandatory spending is required by various laws and includes such things as Social Security, Medicare and Medicaid, food stamps, and interest payments on the national debt; much of these mandatory expenses are funded by trust funds, such as Social Security taxes, which are raised and spent separately from income taxes. Discretionary spending involves the money the president and Congress must decide how to spend each year and includes income tax dollars only. Military spending accounts for about 43% of discretionary spending (Friends Committee on National Legislation, 2009). 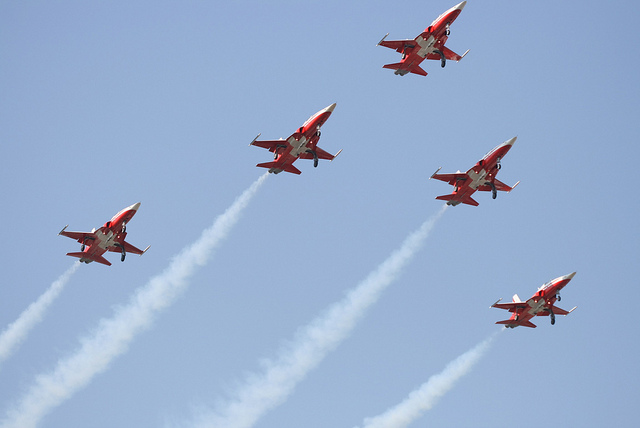 Critics say that U.S. military spending is too high and takes needed dollars from domestic essentials like schooling and health care.

Another dimension of militarism involves arms exports by both the U.S. government and U.S. military contractors. Combining data on both types of exports, the United States sent $12.2 billion in arms deliveries to other nations in 2008. This figure ranked the highest in the world and constituted about 38% of all world arms exports. Russia ranked second with $5.4 billion in arms deliveries, while Germany ranked third with $2.9 billion (Grimmett, 2009). Most arms exports from the United States and other exporters go to developing nations, and critics say that the exports help fuel the worldwide arms race and international discord and that they often go to nations ruled by dictators, who then use them to threaten their own people (Morgan, 2008; Stohl, Schroeder, & Smith, 2007).

Oscar Arias, a former president of Costa Rica and winner of the 1987 Nobel Peace Prize, echoed President Eisenhower when he wrote a decade ago that U.S. military spending took money away from important domestic needs. “Americans are hurt,” he warned, “when the defense budget squanders money that could be used to repair schools or to guarantee universal health care” (Arias, 1999).

Cost equivalencies illustrate what is lost when so much money is spent on the military. An F-22 fighter aircraft, conceived and built to win fights with aircraft that the Soviet Union (and later, Russia) never built, costs about $350 million (Smith, 2009). This same sum could be used to pay the salaries of about 11,700 new teachers earning $30,000 per year or to build 23 elementary schools at a cost of $15 million each. A nuclear submarine can cost at least $2.5 billion. This sum could provide 500,000 scholarships worth $5,000 each to low- and middle-income high school students to help them pay for college.

A key question is whether U.S. military spending is higher than it needs to be. Experts disagree over this issue. Some think the United States needs to maintain and even increase its level of military spending, even with the Cold War long ended, to replace aging weapons systems, to meet the threat posed by terrorists and by “rogue” nations such as Iran, and to respond to various other trouble spots around the world. Military spending is good for workers, they add, because it creates jobs, and it also contributes to technological development (Ruttan, 2006).

Other experts think the military budget is much higher than it needs to be to defend the United States and to address its legitimate interests around the world. They say the military budget is bloated because the defense industry lobbies so successfully and because military spending provides jobs and income to the home districts of members of Congress. For these reasons, they say, military spending far exceeds the amount that needs to be spent to provide an adequate defense for the United States and its allies. They also argue that military spending actually produces fewer jobs than spending in other sectors. According to a recent estimate, $1 billion spent by the Pentagon creates 11,600 jobs, but the same $1 billion spent in other sectors would create 17,100 clean energy jobs, 19,600 health-care jobs, and 29,100 education jobs (Pollin & Garrett-Peltier, 2009).

As this overview of the debate over military spending indicates, the military remains a hot topic more than two decades after the Cold War ended following the demise of the Soviet Union. As we move further into the 21st century, the issue of military spending will present a major challenge for the U.S. political and economic institutions to address in a way that meets America’s international and domestic interests.

Improving Work and the Economy: What Sociology Suggests

Sociological theory and research are once again relevant for addressing certain issues raised by studies of the economy. One issue is racial and ethnic discrimination in hiring and employment. Several kinds of studies, but especially field experiments involving job applicants who are similar except for their race and ethnicity, provide powerful evidence of continuing discrimination despite federal and state laws banning it. This evidence certainly suggests the need for stronger enforcement of existing laws against racial and ethnic bias in employment and for public education campaigns to alert workers to signs of this type of discrimination.

A second issue concerns the satisfaction that American workers find in their jobs. Although the level of this satisfaction is fairly high, sociological research highlights the importance of coworker friendships for both job satisfaction and more general individual well-being. These research findings indicate that employers and employees alike should make special efforts to promote coworker friendships. Because work is such an important part of most people’s lives, these efforts should prove beneficial for many reasons.

Because a sociological understanding of the economy emphasizes its structural problems rather than personal faults of the unemployed and underemployed, this sort of understanding points to the social democracies of Scandinavia as possible models for the United States to emulate. As the “Learning From Other Societies” box discussed, these nations have combined democratic freedom and economic prosperity. Although there are certainly no signs that the United States is about to follow their example, our nation has much to learn from these societies as it considers how best to rebuild its economy and to help the millions of people who are unemployed or underemployed.