Every known society has practiced religion, although the nature of religious belief and practice has differed from one society to the next. Prehistoric people turned to religion to help them understand birth, death, and natural events such as hurricanes. They also relied on religion for help in dealing with their daily needs for existence: good weather, a good crop, an abundance of animals to hunt (Noss & Grangaard, 2008).

Although the world’s most popular religions today are monotheistic (believing in one god), many societies in ancient times, most notably Egypt, Greece, and Rome, were polytheistic (believing in more than one god). You have been familiar with their names since childhood: Aphrodite, Apollo, Athena, Mars, Zeus, and many others. Each god “specialized” in one area; Aphrodite, for example, was the Greek goddess of love, while Mars was the Roman god of war (Noss & Grangaard, 2008). 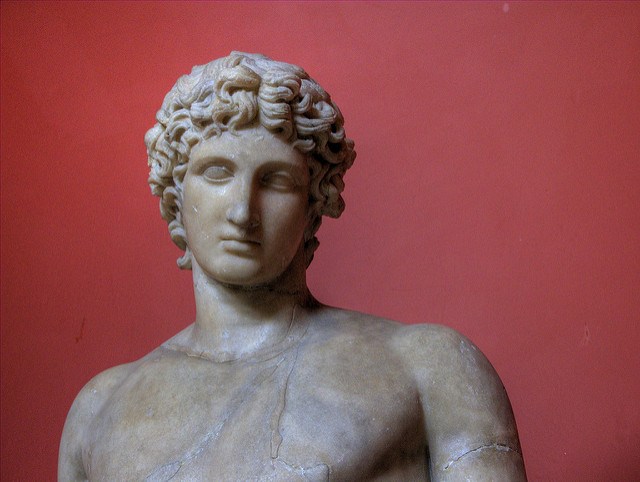 Ancient Greece and Rome were polytheistic, as they believed in many gods. This statue depicts Zeus, the king of gods in Greek mythology.

During the Middle Ages, the Catholic Church dominated European life. The Church’s control began to weaken with the Protestant Reformation, which began in 1517 when Martin Luther, a German monk, spoke out against Church practices. By the end of the century, Protestantism had taken hold in much of Europe. Another founder of sociology, Max Weber, argued a century ago that the rise of Protestantism in turn led to the rise of capitalism. In his great book The Protestant Ethic and the Spirit of Capitalism, Weber wrote that Protestant belief in the need for hard work and economic success as a sign of eternal salvation helped lead to the rise of capitalism and the Industrial Revolution (Weber, 1904/1958). Although some scholars challenge Weber’s views for several reasons, including the fact that capitalism also developed among non-Protestants, his analysis remains a compelling treatment of the relationship between religion and society.

Moving from Europe to the United States, historians have documented the importance of religion since the colonial period. Many colonists came to the new land to escape religious persecution in their home countries. The colonists were generally very religious, and their beliefs guided their daily lives and, in many cases, the operation of their governments and other institutions. In essence, government and religion were virtually the same entity in many locations, and church and state were not separate. Church officials performed many of the duties that the government performs today, and the church was not only a place of worship but also a community center in most of the colonies (Gaustad & Schmidt, 2004). The Puritans of what came to be Massachusetts refused to accept religious beliefs and practices different from their own and persecuted people with different religious views. They expelled Anne Hutchinson in 1637 for disagreeing with the beliefs of the Puritans’ Congregational Church and hanged Mary Dyer in 1660 for practicing her Quaker faith.

Today the world’s largest religion is Christianity, to which more than 2 billion people, or about one-third the world’s population, subscribe. Christianity began 2,000 years ago in Palestine under the charismatic influence of Jesus of Nazareth and today is a Western religion, as most Christians live in the Americas and in Europe. Beginning as a cult, Christianity spread through the Mediterranean and later through Europe before becoming the official religion of the Roman Empire. Today, dozens of Christian denominations exist in the United States and other nations. Their views differ in many respects, but generally they all regard Jesus as the son of God, and many believe that salvation awaits them if they follow his example (Young, 2010).

The second largest religion is Islam, which includes about 1.6 billion Muslims, most of them in the Middle East, northern Africa, and parts of Asia. Muhammad founded Islam in the 600s A.D. and is regarded today as a prophet who was a descendant of Abraham. Whereas the sacred book of Christianity and Judaism is the Bible, the sacred book of Islam is the Koran. The Five Pillars of Islam guide Muslim life: (a) the acceptance of Allah as God and Muhammad as his messenger; (b) ritual worship, including daily prayers facing Mecca, the birthplace of Muhammad; (c) observing Ramadan, a month of prayer and fasting; (d) giving alms to the poor; and (e) making a holy pilgrimage to Mecca at least once before one dies. 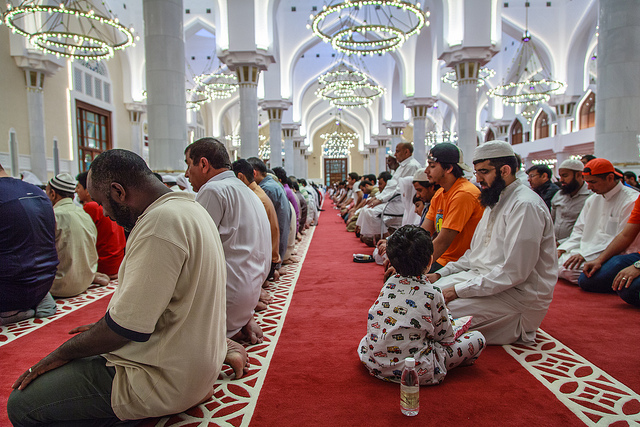 These individuals are praying at a mosque, the place of worship for the religion of Islam. Islam is the world’s second largest religion, with an estimated 1.6 billion adherents.

The third largest religion is Hinduism, which includes more than 800 million people, most of whom live in India and Pakistan. Hinduism began about 2000 B.C. and, unlike Christianity, Judaism, and Islam, has no historic linkage to any one person and no real belief in one omnipotent deity. Hindus live instead according to a set of religious precepts called dharma. For these reasons Hinduism is often called an ethical religion. Hindus believe in reincarnation, and their religious belief in general is closely related to India’s caste system (see Chapter 9 “Global Stratification”), as an important aspect of Hindu belief is that one should live according to the rules of one’s caste.

Buddhism is another key religion and claims almost 400 million followers, most of whom live in Asia. Buddhism developed out of Hinduism and was founded by Siddhartha Gautama more than 500 years before the birth of Jesus. Siddhartha is said to have given up a comfortable upper-caste Hindu existence for one of wandering and poverty. He eventually achieved enlightenment and acquired the name of Buddha, or “enlightened one.” His teachings are now called the dhamma, and over the centuries they have influenced Buddhists to lead a moral life. Like Hindus, Buddhists generally believe in reincarnation, and they also believe that people experience suffering unless they give up material concerns and follow other Buddhist principles.

Another key religion is Judaism, which claims more than 13 million adherents throughout the world, most of them in Israel and the United States. Judaism began about 4,000 years ago when, according to tradition, Abraham was chosen by God to become the progenitor of his “chosen people,” first called Hebrews or Israelites and now called Jews. The Jewish people have been persecuted throughout their history, with anti-Semitism having its ugliest manifestation during the Holocaust of the 1940s, when 6 million Jews died at the hands of the Nazis. One of the first monotheistic religions, Judaism relies heavily on the Torah, which is the first five books of the Bible, and the Talmud and the Mishnah, both collections of religious laws and ancient rabbinical interpretations of these laws. The three main Jewish dominations are the Orthodox, Conservative, and Reform branches, listed in order from the most traditional to the least traditional. Orthodox Jews take the Bible very literally and closely follow the teachings and rules of the Torah, Talmud, and Mishnah, while Reform Jews think the Bible is mainly a historical document and do not follow many traditional Jewish practices. Conservative Jews fall in between these two branches.

A final key religion in the world today is Confucianism, which reigned in China for centuries but was officially abolished in 1949 after the Chinese Revolution ended in Communist control. People who practice Confucianism in China today do so secretly, and its number of adherents is estimated at some 5 or 6 million. Confucianism was founded by K’ung Fu-tzu, from whom it gets its name, about 500 years before the birth of Jesus. His teachings, which were compiled in a book called the Analects, were essentially a code of moral conduct involving self-discipline, respect for authority and tradition, and the kind treatment of everyone. Despite the official abolition of Confucianism, its principles continue to be important for Chinese family and cultural life.

As this overview indicates, religion takes many forms in different societies. No matter what shape it takes, however, religion has important consequences. These consequences can be both good and bad for the society and the individuals in it. Sociological perspectives expand on these consequences, and we now turn to them.