As this evidence on kissing suggests, what seems to us a very natural, even instinctual act turns out not to be so natural and biological after all. Instead, kissing seems best understood as something we learn to enjoy from our culture, or the symbols, language, beliefs, values, and artifacts (material objects) that are part of a society. Because society, as defined in Chapter 1 “Sociology and the Sociological Perspective”, refers to a group of people who live in a defined territory and who share a culture, it is obvious that culture is a critical component of any society.

If the culture we learn influences our beliefs and behaviors, then culture is a key concept to the sociological perspective. Someone who grows up in the United States differs in many ways, some of them obvious and some of them not so obvious, from someone growing up in China, Sweden, South Korea, Peru, or Nigeria. Culture influences not only language but the gestures we use when we interact, how far apart we stand from each other when we talk, and the values we consider most important for our children to learn, to name just a few. Without culture, we could not have a society.

The profound impact of culture becomes most evident when we examine behaviors or conditions that, like kissing, are normally considered biological in nature. Consider morning sickness and labor pains, both very familiar to pregnant women before and during childbirth, respectively. These two types of discomfort have known biological causes, and we are not surprised that so many pregnant women experience them. But we would be surprised if the husbands of pregnant women woke up sick in the morning or experienced severe abdominal pain while their wives gave birth. These men are neither carrying nor delivering a baby, and there is no logical—that is, biological—reason for them to suffer either type of discomfort.

And yet scholars have discovered several traditional societies in which men about to become fathers experience precisely these symptoms. They are nauseous during their wives’ pregnancies, and they experience labor pains while their wives give birth. The term couvade refers to these symptoms, which do not have any known biological origin. Yet the men feel them nonetheless, because they have learned from their culture that they should feel these types of discomfort (Doja, 2005). And because they should feel these symptoms, they actually do so. Perhaps their minds are playing tricks on them, but that is often the point of culture. As sociologists William I. and Dorothy Swaine Thomas (1928) once pointed out, if things are perceived as real, then they are real in their consequences. These men learn how they should feel as budding fathers, and thus they feel this way. Unfortunately for them, the perceptions they learn from their culture are real in their consequences.

The example of drunkenness further illustrates how cultural expectations influence a behavior that is commonly thought to have biological causes. In the United States, when people drink too much alcohol, they become intoxicated and their behavior changes. Most typically, their inhibitions lower and they become loud, boisterous, and even rowdy. We attribute these changes to alcohol’s biological effect as a drug on our central nervous system, and scientists have documented how alcohol breaks down in our body to achieve this effect. 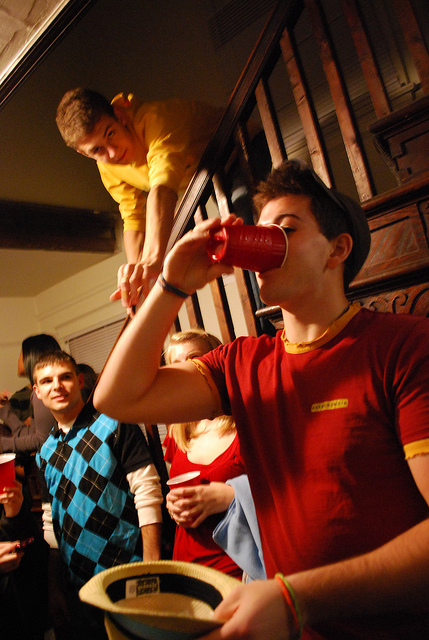 Culture affects how people respond when they drink alcohol. Americans often become louder and lose their sexual inhibitions when they drink, but people in some societies studied by anthropologists often respond very differently, with many never getting loud or not even enjoying themselves.

This explanation of alcohol’s effect is OK as far as it goes, but it turns out that how alcohol affects our behavior depends on our culture. In some small, traditional societies, people drink alcohol until they pass out, but they never get loud or boisterous; they might not even appear to be enjoying themselves. In other societies, they drink lots of alcohol and get loud but not rowdy. In some societies, including our own, people lose sexual inhibitions as they drink, but in other societies they do not become more aroused. The cross-cultural evidence is very clear: alcohol as a drug does affect human behavior, but culture influences the types of effects that occur. We learn from our culture how to behave when drunk just as we learn how to behave when sober (McCaghy, Capron, Jamieson, & Carey, 2008).

These examples suggest that human behavior is more the result of culture than it is of biology. This is not to say that biology is entirely unimportant. As just one example, humans have a biological need to eat, and so they do. But humans are much less under the control of biology than any other animal species, including other primates such as monkeys and chimpanzees. These and other animals are governed largely by biological instincts that control them totally. A dog chases any squirrel it sees because of instinct, and a cat chases a mouse for the same reason. Different breeds of dogs do have different personalities, but even these stem from the biological differences among breeds passed down from one generation to another. Instinct prompts many dogs to turn around before they lie down, and it prompts most dogs to defend their territory. When the doorbell rings and a dog begins barking, it is responding to ancient biological instinct.

Because humans have such a large, complex central nervous system, we are less controlled by biology. The critical question then becomes, how much does biology influence our behavior? Predictably, scholars in different disciplines answer this question in different ways. Most sociologists and anthropologists would probably say that culture affects behavior much more than biology does. In contrast, many biologists and psychologists would give much more weight to biology. Advocating a view called sociobiology, some scholars say that several important human behaviors and emotions, such as competition, aggression, and altruism, stem from our biological makeup. Sociobiology has been roundly criticized and just as staunchly defended, and respected scholars continue to debate its premises (Freese, 2008).

Why do sociologists generally favor culture over biology? Two reasons stand out. First, and as we have seen, many behaviors differ dramatically among societies in ways that show the strong impact of culture. Second, biology cannot easily account for why groups and locations differ in their rates of committing certain behaviors. For example, what biological reason could explain why suicide rates west of the Mississippi River are higher than those east of it, to take a difference discussed in Chapter 2 “Eye on Society: Doing Sociological Research”, or why the U.S. homicide rate is so much higher than Canada’s? Various aspects of culture and social structure seem much better able than biology to explain these differences.

Many sociologists also warn of certain implications of biological explanations. First, they say, these explanations implicitly support the status quo. Because it is difficult to change biology, any problem with biological causes cannot be easily fixed. A second warning harkens back to a century ago, when perceived biological differences were used to justify forced sterilization and mass violence, including genocide, against certain groups. As just one example, in the early 1900s, some 70,000 people, most of them poor and many of them immigrants or African Americans, were involuntarily sterilized in the United States as part of the eugenics movement, which said that certain kinds of people were biologically inferior and must not be allowed to reproduce (Lombardo, 2008). The Nazi Holocaust a few decades later used a similar eugenics argument to justify its genocide against Jews, Catholics, gypsies, and gays (Kuhl, 1994). With this history in mind, some scholars fear that biological explanations of human behavior might still be used to support views of biological inferiority (York & Clark, 2007).