Religion clearly plays an important role in American life. Most Americans believe in a deity, three-fourths pray at least weekly, and more than half attend religious services at least monthly. We tend to think of religion in individual terms because religious beliefs and values are highly personal for many people. However, religion is also a social institution, as it involves patterns of beliefs and behavior that help a society meet its basic needs, to recall the definition of social institution in Chapter 5 “Social Structure and Social Interaction”. More specifically, religion is the set of beliefs and practices regarding sacred things that help a society understand the meaning and purpose of life. 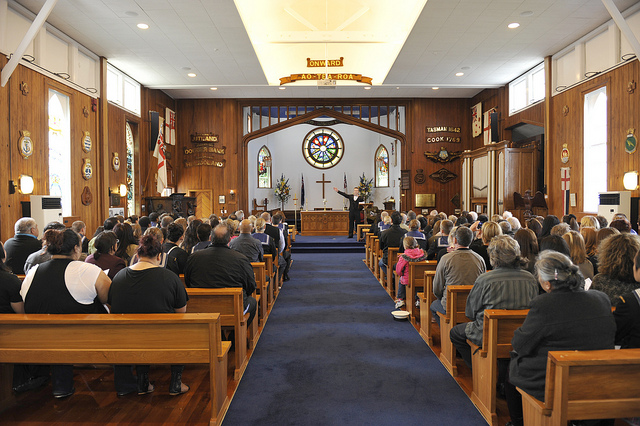 More than half of all Americans attend religious services at least once per week. This illustrates the important role that religion plays in American life.

Because it is such an important social institution, religion has long been a key sociological topic. Émile Durkheim (1915/1947) observed long ago that every society has beliefs about things that are supernatural and awe-inspiring and beliefs about things that are more practical and down-to-earth. He called the former beliefs sacred beliefs and the latter beliefs profane beliefs. Religious beliefs and practices involve the sacred: they involve things our senses cannot readily observe, and they involve things that inspire in us awe, reverence, and even fear.

Durkheim did not try to prove or disprove religious beliefs. Religion, he acknowledged, is a matter of faith, and faith is not provable or disprovable through scientific inquiry. Rather, Durkheim tried to understand the role played by religion in social life and the impact on religion of social structure and social change. In short, he treated religion as a social institution.

Sociologists since his time have treated religion in the same way. Anthropologists, historians, and other scholars have also studied religion. Historical work on religion reminds us of the importance of religion since the earliest societies, while comparative work on contemporary religion reminds us of its importance throughout the world today. Accordingly, Chapter 17 “Religion”, Section 17.2 “Religion in Historical and Cross-Cultural Perspective” examines key aspects of the history of religion and its practice across the globe.