Liver damage can be assessed through analysis of liver enzymes and products as well as by liver function “tests”. We look for loss of cellular contents, changes in liver function and signs of liver dysfunction.

AST* and ALT will be elevated with hepatocyte damage, while ALP and GGT are more typically elevated with bile stasis or bile duct pressure. 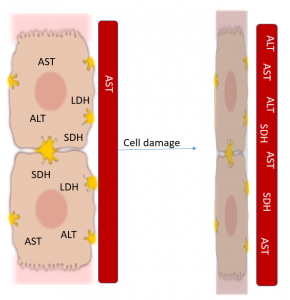 In dogs and cats, ALT is the most useful as it is much more liver specific. However, it can be released from muscle cells too so doesn’t necessarily indicate liver damage.

Horses and ruminants have low levels of ALT in hepatocytes so it isn’t very useful. SDH is much more useful in those species.

AST is also released from muscle cells in all species but be used to identify hepatocyte damage if muscle enzymes are low.

GDH (GLDH) is used in other countries but is not routinely available in the US.

All leakage enzymes values may also be normal in end stage (cirrhotic or scarred) liver disease as the cells have already released theses factors. 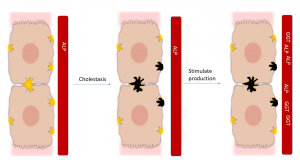 GGT is considered to be an induced enzyme but can be released with acute hepatocellular damage. Many other cell types also produce GGT, especially the pancreas and the kidney. However, the kidney and pancreas elevations do not usually result in increased serum levels of GGT.

In large animal species, just GGT is used in most cases. Keep in mind that other things can lead to increases in GGT (not just the liver).

The released bile aids in fat emulsification and absorption. Some of the bile salts are reabsorbed passively in the proximal intestine but most are actively transported back into the blood in the ileum. 90-95% of the salts are returned to the liver. In the liver, the bile salts are extracted and reused. This process repeats 10-12x per day, creating the .  Small amounts of bile salts escape absorption and pass into the colon where they are broken down by bacteria. These products create the brown stool color and yellow urine color.

Bile acids are very sensitive indicators of cholestasis and liver damage. Any jaundiced patient will have elevated serum bile acids but they can be useful in determining the cause of the jaundice and help with identifying diffuse liver damage. Generally bile acids are measured both before and after eating in dogs and cats; a single sample is adequate in herbivores.

Ammonia is produced by intestinal microbes, reabsorbed into the blood and removed by the liver. The liver uses the ammonia for urea and protein synthesis. Ammonium levels are elevated with changes in hepatic blood flow and decreased functional hepatic mass. Levels can be elevated by strenuous exercise, urea toxicity and other conditions but not with cholestasis. This means ammonia levels provides a nice comparison to bile acid levels. Ammonia measurement is not a very sensitive test but is useful to measure in cases of suspected .

Albumin is produced by the liver. Hypoalbuminemia  (low albumin levels) is quite common in dogs with loss of 60-80% of liver function. It is not as commonly seen in horses.

Globulins are also produced by the liver but may be elevated in liver disease. Elevations in liver disease are likely due to less processing of foreign compounds by the hepatic Kupffer cells, resulting in an increased immune response.

Glucose levels may be either decreased, increased or normal, depending on other mechanisms involved.

Cholesterol is produced in the liver. Levels may be low, normal or elevated and depend in part on if cholestasis is a component of the liver dysfunction.

Clotting factors are produced in the liver. Liver dysfunction can lead to coagulopathies and prolonged bleeding times due to low levels of clotting factors.

Loss of liver function can lead to clinical signs, including

End stage liver disease may be accompanied by normal AST/ALT as all cells have released their contents. Diagnosis may be via low albumin, high ammonia, prolonged bleeding times, and high serum bile acids.

The process by which something excreted in the bile into the intestinal tract is reabsorbed and returned to the liver. Common components are bile acids and drugs.

Swelling caused by accumulation of fluid in the tissues

accumulation of fluid in the peritoneal (abdominal) cavity