Weight loss is often associated with hypoalbuminemia and potentially hypoproteinemia.

Insufficient calories can be due to insufficient intake (agroceriosis) or less intake than calorie usage. Increased calories are required with exercise, pregnancy, lactation, hyperthyroidism, parasitism, neoplasia and chronic illnesses.

Protein loss can be identified in dogs and cats by measuring alpha-1-proteinase inhibitor.  This protein leaks into the intestinal lumen with severe disease but isn’t digested so can be measured in the feces.

D-xylose is a plant sugar that isn’t normally found in the bloodstream and is readily absorbed. D-xylose is administered orally and then blood levels measured. If blood levels do not rise sufficiently, malabsorption is diagnosed. If weight loss is present and D-xylose levels are normal, the problem is more likely to be maldigestion (e.g. pancreatic dysfunction). A flattened peak suggests malabsorption while a delayed peak correlates with delayed gastric emptying.

Cobalamin is an essential co-factor in many mammalian enzyme systems. It comes exclusively from bacteria and is important in amino acid metabolism and DNA synthesis.  Absorption is highly complex.

Maldigestion can be assessed through 1) trypsin-like immunoreactivity, 2) folate levels and 3) cobalamin levels. Additionally, enzyme levels can be measured for gastrin and pancreatic lipase.

TLI is a more accurate measure of pancreatic function than lipase or amylase levels. Species-specific TLI is considered the optimum test for exocrine pancreatic insufficiency (EPI).

Folate can only be absorbed in the proximal small intestine. Many bacteria produce folate but generally only in the large intestine which has no receptors for folate absorption. In cases of pancreatic insufficiency, bacteria can overgrow in the small intestine due to lack of pancreatic enzymes. This can lead to high levels of folate in dogs with EPI.  Cats tend to have low folate levels with EPI as they also get intestinal damage that impacts the folate receptors.

Cobalamin insufficiency is more likely to be associated with exocrine pancreatic insufficiency than with malabsorption as described above. However, if TLI is normal, cobalamin and folate abnormalities are more likely to be associated with intestinal malabsorption.  (When you have bacterial overgrowth, they bind the cobalamin receptor and prevent cobalamin uptake into the cell so this also lowers levels.) 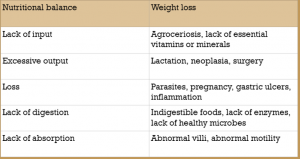 Treatment of obesity in dogs and cats, Today’s Veterinary Practice