Similar to the small intestine, the large intestine can be functionally or physically obstructed.  When the large intestine is obstructed, gas and feed material are backed up.  Obstruction leads to decreased fecal output, abdominal distension and discomfort. Gas buildup indicates  a complete obstruction (this can be physical or functional obstruction). Mild dehydration can occur along with mild pain signs.

Functional obstruction is due to dysfunction of nerves and/or muscles.  Functional obstruction is termed “ileus” and can lead to a backup of feces, gas or a combination of feces and gas. Causes include increased sympathetic tone, decreased motility (due to decreased exercise, drugs, neuronal changes in the enteric or autonomic nervous system), and surgery/anesthesia.

Obstruction in the hindgut leads to impacted dry feces and to gas buildup proximal to the obstruction. Animals may become so gassy that they appear distended. When the obstruction is passed, the manure may be dry and mucous covered due to its longer time in the colon.

In horses, feed impactions are very common. These usually occur at the pelvic flexure – part of the large colon that makes a hairpin turn and narrows.  Feed impactions occur due to poor mastication, poorly digestible feedstuffs, decreased water intake, decreased exercise, changes in routine and recent illness, among lots of other things. If the total body water content becomes too low (dehydration), more water is absorbed from the colon, making the stool even drier. Stool that is retained in the colon will also become dry. Astute animal owners can detect changes in their pet through changes in the stool size and consistency. 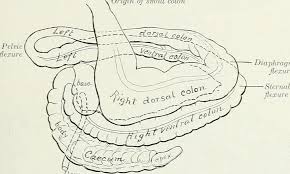 Displacements are another common cause of obstructions – the bowel moves around and kinks off. Again, this is a common problem in horses since their guts are full of gas producing bacteria and are not tacked down. See video animation

Horses frequently get “gas colic” with tremendous buildup of gas in the large intestine but without any physical obstruction. The gas distension may start with an excess of fermentable foods; happy microbes produce more gas. More gas stretches the colon wall and sets up a pain response which increases sympathetic tone and makes things worse.

Foreign bodies usually get stuck more proximally (stomach and SI) but can work their way down if smaller objects. Small animals don’t get as gassy unless suffering chronic complete obstructions.

Primary constipation is relatively rare in dogs.  Cats get megacolon – severe impactions that just sit there. These are considered due to neuronal dysfunction.  Chronic constipation may also result in secondary dilation and dysfunction of the colon.

Cattle tend to develop functional obstructions after calving due to low calcium levels (all of the calcium is going into milk production). This leads to ileus and often cecal dilation.

Diagnostics depend a bit on the size of the animal.  In all cases, abdominal contour can be useful as can the level of pain (generally mild) and dehydration (mild).  In fermenters such as cattle and horses, functional or mechanical obstruction usually results in bloat (abdominal distension). Unless an intestinal twist is causing the obstruction, these animals are not usually as sick as those with upper GI obstructions.

Small animals – Clinical signs include abdominal distension and mild pain. Stool may be dry. Vomiting is usually not observed.  Dehydration may be evident but is usually mild. Diagnostics focus on abdominal palpation and radiographs. On radiographs, colonic distension with feed material is observed. The colon can be identified by its extension into the pelvis.  Additional diagnostic evaluation may include digital rectal examinations, other imaging, and laboratory workup to identify inflammatory, metabolic or endocrine disorders.

Large animals –  Clinical signs include abdominal distension, changes on rectal palpation, mild pain, mild dehydration and fecal balls that are small and dry. Feces that have been held in the colon for longer than usual may be coated with mucus.  Reflux is not usually observed. Response to therapy is also useful as a diagnostic test. We know most cases of equine colic are gas (functional obstruction) and pelvic flexure impactions (feed impactions) so often treat for those and only explore additional diagnostics if the animal does not respond.

Most animals with complete obstruction develop bilateral abdominal distension. Due to the large rumen, cattle can have unilateral distension and we use the location to help identify what is likely distended.

Animals that are not defecating frequently enough may be treated conservatively at home, medically in the clinic or with surgery. Being able to localize the lesion to the small or large intestine will enhance decision making, as animals with small intestinal obstruction will tend to be sicker and less likely to respond to at home treatment.  This is related to the large volume of secretions and electrolyte movement in that section.

For mild impactions, overhydration via enteral fluids (through the GI tract, not intravenously), exercise, analgesics and laxatives are often enough to get things moving.

Buscopan is used in horses for gas colic. This drug actually slows motility (anticholinergic) but that can help with gut spasms. Removing the gut spasm decreases pain and decreases the flight response, leading to an eventual improvement in gut activity. Repeated doses would be bad though – leading to primarily decreased gut function.

Gastric distension can be used to stimulate the gastrocolic reflex and empty the colon.

Laxatives are frequently given to cats and horses to help dry feed material and hairballs slide through. Various types of laxatives can be used. Insoluble fiber is useful in all species to help peristalsis and maintain good fecal water levels. 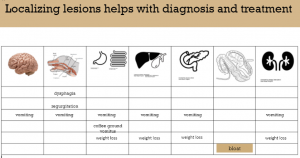 Bowel obstruction, causes and pathophysiology– really nice overview; yes human but it all is relevant

Digestive track comparison – comparative function and adaptations in one page

Irritable bowel syndrome – probably in our vet patients too