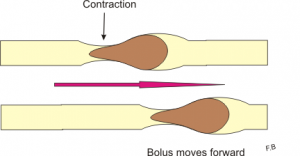 Peristalsis is the aborad (away from the mouth) propulsion of ingesta through the parts of the GI tract. To move  ingesta, generally the portion of intestine just orad (oral cavity side) to the food squeezes shut through combined circular muscle contraction and longitudinal muscle relaxation. For the bolus to move, the intestine just aborad to the food has to open up (circular muscle relaxation and longitudinal muscle contraction). Due to the connections between gut neurons, the process continues smoothly in most instances.

Peristalsis occurs in the esophagus, SI and LI. The stomach contracts and empties but doesn’t really have this particular type of peristaltic activity.

Segmentation and mixing are also required to ensure the ingesta is broken down into small enough particles and gets exposed to the mucosa surface for absorption. In this activity pattern, the area with the ingesta alternately contracts and relaxes.

Segmentation is intestinal activity but not motility.

There are species differences in the type of motility patterns. Dogs eat relatively large meals at set times of the day while horses graze continuously. There are major waves of peristalsis that “clean house” in the dog. These mass movements move everything out of the small intestine. In the horse, there are different electrical and contractile patterns that result in continual activity with fewer periods of mass movement.

This is backwards motility

Retrograde peristalsis occurs in the large intestine, particularly in herbivores, to allow full digestion of cellulose. After a time, mass movements shift the colonic contents aborad toward the rectum. Eructation/regurgitation is considered normal in ruminants (cattle, sheep, goats, deer) and camelids. Sometimes retrograde peristalsis occurs in the esophagus and SI but is considered abnormal in most species (aka regurgitation and vomiting).

Retrograde peristalsis in the stomach/SI of monogastrics is observed as vomiting.

Retrograde peristalsis in the esophagus of monogastrics is observed as regurgitation.

The GI tract is under complex control. Typically intestinal activity is stimulated by the sight, smell and ingestion of food. The main activity patterns come from the enteric nervous system and its multitude of neurotransmitters. The main types are adrenergic (norepinephrine), cholinergic (acetylcholine) and non-adrenergic/non-cholinergic ones (NANC or everything else).

The gut is affected by the parasympathetic nervous system, 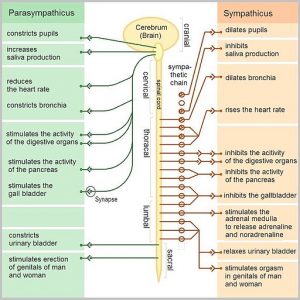 particularly through the vagus nerve.  Stimulation by the parasympathetic system tends to encourage “rest and digest” – stimulating gut activity through more acetylcholine release. Blood is directed toward digestive processes.

The sympathetic nervous system also plays a role, tending to inhibit GI activity and blood flow for the “flight or fight” response. Blood is shunted away from the guts to more vital organs and leg muscles. A similar shut down occurs with pain, even if flight isn’t necessary.

This is a balance – there is always some acetylcholine release and some norepinephrine response. The effect depends on which is in greater amounts. It is possible to block either response using drugs, as well.

This nervous system uses acetylcholine (cholinergic), norepinephrine (adrenergic), and non-adrenergic/non-cholinergic neurotransmitters. The ENS can function in the absence of the autonomic nervous system.

Part of the GIT do “talk” to each other to coordinate activity.

Circulating hormones also affect the gut- there are receptors for most hormones in the GI tract, including adrenal and thyroid hormones, estrogen and oxytocin.   The brain-gut connection is very strong as most all of us have experienced in stressful situations. With dysfunction, the gut can also affect the brain. When the liver isn’t functioning well, the amino acids that pass through the liver can become neurotransmitters with direct neurological effects.

The enteric nervous system is connected throughout its length, providing feedback to other sections depending upon fill.  Four of the most crucial communication reflexes are:

Stomach distension leads to colonic propulsion and defecation. The goal is empty out the old stuff so there is room for the incoming.

Distension in one area of the intestines slows motility of segments proximal. The goal is to avoid adding more ingesta to the already distended section.

Higher than usual nutrient levels (especially fats) entering the ileum slow motility in the proximal small intestine. The goal is to allow more time for digestion.

The enteric nervous system – video; more than you need to know but good explanation of basics too