Regurgitation is the release of food back out of the mouth when the food has not reached the stomach (undigested). It is usually related to esophageal dysfunction or obstruction.

Esophageal disorders lead to regurgitation or retrograde flow of the bolus back up and out the mouth. Most disorders are related to poor muscle tone or neurogenic disorders affecting the esophagus.

Idiopathic (unknown cause) megaesophagus is the most common cause of regurgitation in dogs 7-15 years of age. Congenital megaesophagus and myasthenia gravis can cause similar signs as can several other endocrine disorders.

Food, treats and toys causing physical obstruction can be visualized with radiographs (SA) and endoscopy (LA).

The esophagus is not generally  radiographically visible in normal animals. 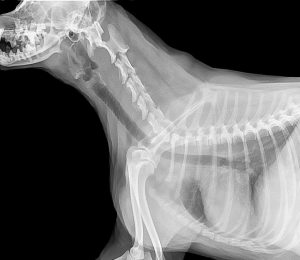 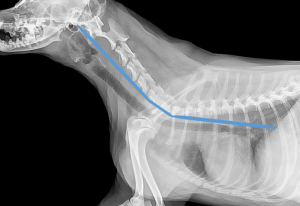 Animals with esophageal dysfunction may have swallowed air present in the esophagus.

Contrast studies using regular films or fluoroscopy can help identify megaesphagus and motility disorders. Food is mixed with barium to be able to follow the food during imaging. 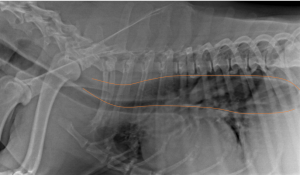 Endoscopy is very useful in horses since they can be scoped while standing and awake.

Dogs with regurgitation without a diagnosis should be tested for myasthenia gravis (test for anti-acetylcholine receptor antibodies), for thymoma via thoracic radiographs, Addison’s disease via ACTH stimulation test, hypothyroidism via a thyroid panel (T4, FT4, TSH) and for lead toxicity.

Many esophageal obstructions can be removed endoscopically. Myasthenia gravis is treated with anticholinesterase inhibitors. Immune or inflammatory conditions can be treated with systemic or local steroids. Vitamin E and thyroid supplements are given for for related deficiencies.

Most other disorders, including megaesophagus, are treated symptomatically. Symptomatic treatment may include changing the consistency of food (creating a slurry or a meatball), elevated feeding and/or treatment with proton pump inhibitors and sucralfate (ulcer therapy).