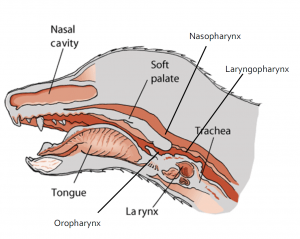 Different species prehend (grab) their food in different ways, with some using lips more than tongue and vice versa. Usually prehension abnormalities are easy to identify as animals visibly struggle to pick up or grab food. Oral exams and cranial nerve evaluations are crucial to localize lesions.

Chewing requires a functional cranial nerve V (trigeminal), normal muscle function and healthy teeth. Issues can be caused by problems with neuromuscular function, dental issues, pain on chewing or foodstuffs that are tough to chew.

Swallowing requires central stimulation and involves opening of the upper esophageal sphincter, movement of the soft palate upwards to close off the nostrils and retroflexion of the epiglottis to cover the airway. Swallowing is controlled by the brainstem and happens reflexively – no effort required in most situations. Cranial nerves IX, X and XII are all involved. Problems with any of those steps can lead to dysphagia and dropped food.

Esophageal motility is controlled by the autonomic nervous system and is involuntary. Central stimulation opens the upper esophageal sphincter and starts a peristaltic wave that generally carries the bolus to the stomach, coordinating the progression of the bolus with opening of the lower esophageal sphincter. If the bolus doesn’t get all the way down, local reflexes create a secondary peristaltic wave. Most disorders are related to poor muscle tone or neurogenic disorders of the swallowing component or esophagus.

After teeth grind up the food and the tongue shapes it into a bolus, the brainstem kicks in to swallow it. The upper esophageal sphincter opens while the palate protects the nasal passageway and the epiglottis protects the trachea. The bolus moves down the esophagus in a quick peristaltic burst. The lower esophageal sphincter opens automatically to let the bolus move into the stomach.

Esophagus endoscopy in the dog– video

I am your esophagus